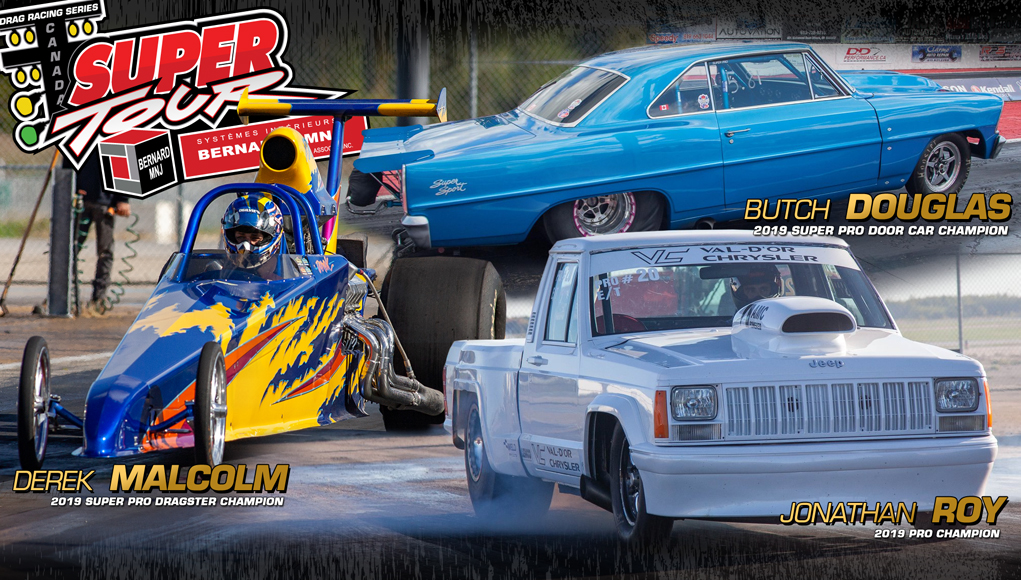 Here is the final ranking of the 2019 Bracket Super Tour.

The 2019 Super Pro Dragster champion is Derek Malcolm wheeling his yellow American Dragster. The Ottawa driver wins the title with a total of 5,700 points with two wins at the fifth and sixth rounds at Luskville as part of Bracket Bonanza. He’s taking home $3,000 and a free weekend entry at an SFG race next year as he is the racer with the most points this season. 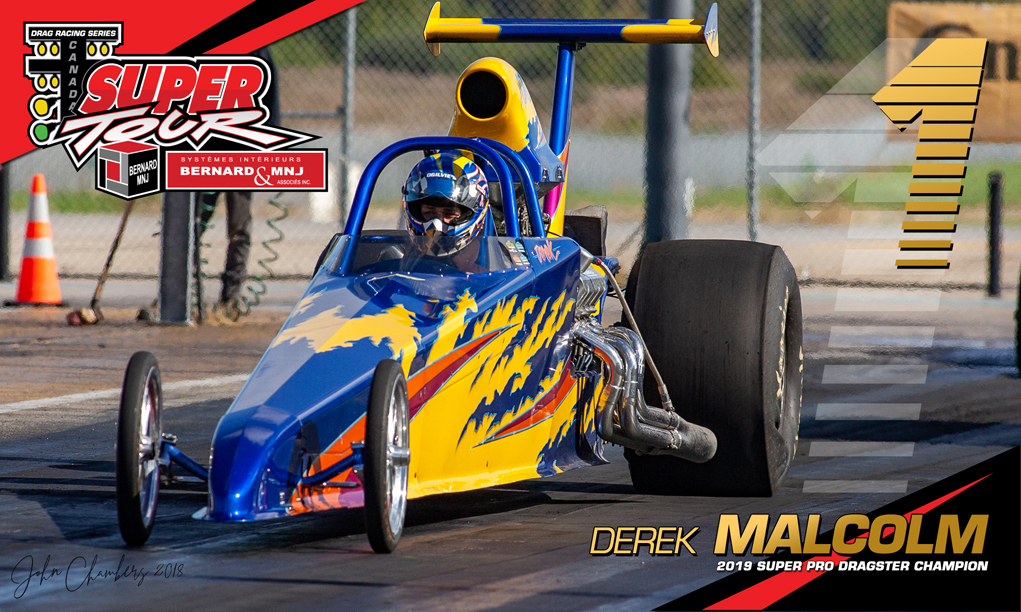 This season, two champions are crowned in the Super Pro category. Butch Douglas from Belleville is the 2019 Super Pro Door Car Champion with his magnificent Chevy II. With 4,900 points thanks to a victory at the eighth race in Luskville, Douglas is the first Door Car Champion in Super Tour history! 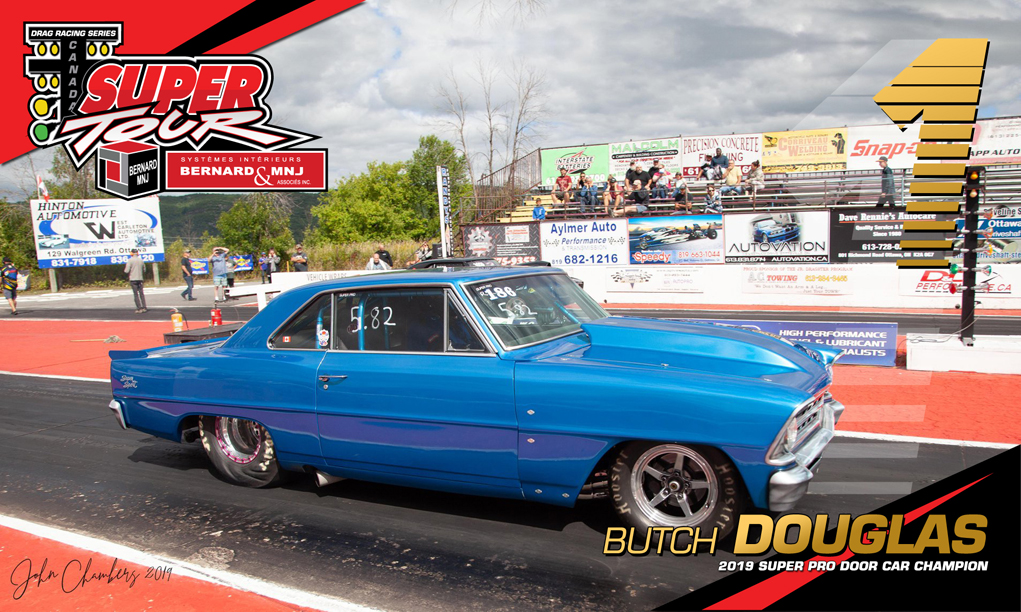 In the Pro category, driving his Jeep Commanche, Jonathan Roy from Val d’Or is the 2019 Champion. Roy cumulates 4,900 points and wins my the smallest margin the championship with a one-round lead over his nearest rival! Despite not winning any race this season, the Valdorien reached the final of the first race in Mirabel and the semi final at the fifth race in Luskville. 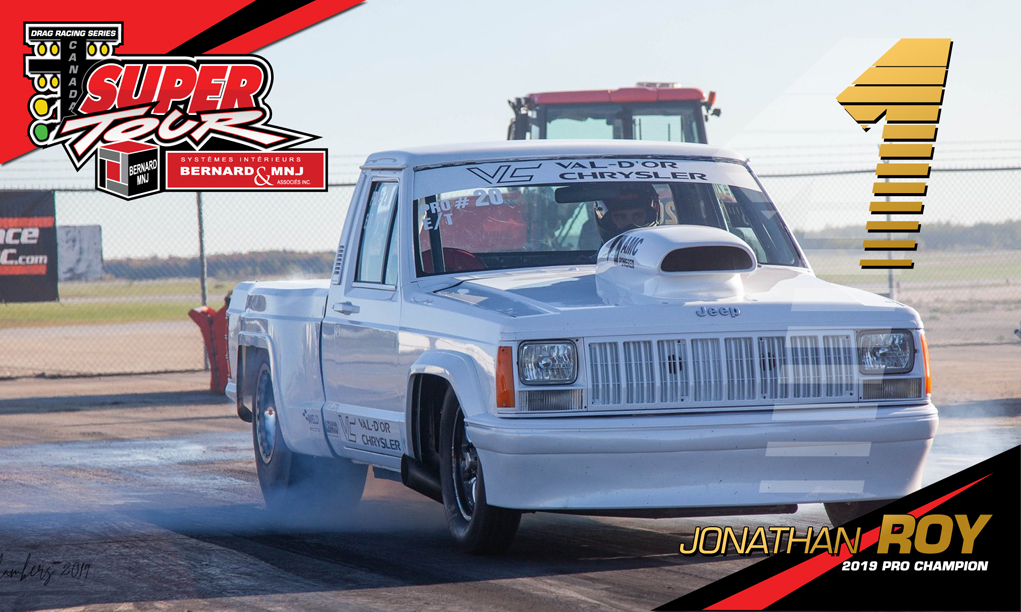 Still in the Pro category, Stephen Ballantyne from Gatineau finish second. The driver who won the opening race at Mirabel struggled mid-season to make a big jump in the final race with a semi-final loss. Ballantyne finished the season with 4,800 points at just 100 points from the leader.

Important to note, Stephen Ballantyne had to win only one more round of elimination to clinch the championship. A tie at the top of the points sheet would have been broken by the tie-breaker rule giving the championship to the driver cumulating the most points, earlier in the season. Ballantyne had the best of Jonathan Roy in the final of the first race of the year. That round would have giving him the title.

Russ Adams finishes the season in 3rd place in the overall Super Pro ranking. The Ottawa driver has 5,200 points with a win in the first race and a semifinals loss of the fifth race.

The favorite to win the championship before the final round, Tim Fearrey, finally finished in third place. A good season for the Luskville racer who has reached the semi-finals three times. He has 4,600 points.

The 2019 champion strikes again and finds himself in fourth place Super Pro with his second entry in the championship. Derek Malcolm gets 4,101 points with the ADM Motorsports Blue American Dragster.

The Canadian Bracket Finals winner Jim Giff from Ottawa jumps from 14th all the way up to 4th thanks to this win and gets 4,400 points.

The 2018 Super Pro Champion Brandon Barker is enjoying an excellent season once again this year finishing respectively fifth and sixth with his two entries. In addition to winning the Main Event at the Bracket Finals, Barker also got the runner-up of the seventh race in Luskville.

Fifth in the Pro category is Karine Gendron. The Ste-Thérèse racer has 4,200 points with her Ford Mustang, a top for a female racer at the Super Tour. Gendron reached the semifinal of the fifth race.

The young Dan Pillwein from Luskville looks good in sixth place in the Pro class. A win at the seventh race gives him a total of 4,100 points.

A second door car gets into the top 10 of Super Pro as Chris Dennique cumulates 4,000 points with his Chevrolet Camaro. The Renfrew driver finish the season with a strong seventh place.

Russ Fraser from Elisabethown has 3,800 points in seventh place in the Pro class. Fraser’s best performance this year was a semifinal loss of the fifth race.

Another excellent performance from Roch Beaudoin who finishes in eighth place this season after finishing second last year. The Northern Ontario racer reached the Bracket Bonanza semi-final to earn 3,901 points.

Mark Thompson from Ottawa drove his 1970 Super Bee to an eighth place finish at the Pro class this season. Thompson post a score of 3,700 points with a semifinal presence in the sixth race.

Rachel Ogilvie is the driver with the biggest improvement this season. Ogilvie finishes ninth with 3,900 points. In addition to two Super Tour semifinal appearances, the young driver also won two race this season off the tour circuit.

Darryl Jensen finished ninth in the Pro class with 3,502 points. The Ottawa driver has been consistent this season with a minimum of 2 rounds wins at every races.

A successful return in competition for Jean Harvey. The Terrebonne driver who was back on track after more than 20 years of absence finished in tenth place with 3,800 points.

The top 10 in the Pro category closes with Eric Corriveau of St-Colomban with a score of 3,501 points. Corriveau gets to the top 10 for a fourth year in a row finishing second last year, ninth win 2017 and third in 2016.

Here is the complete rankings of 2019 for Super Pro and Pro. 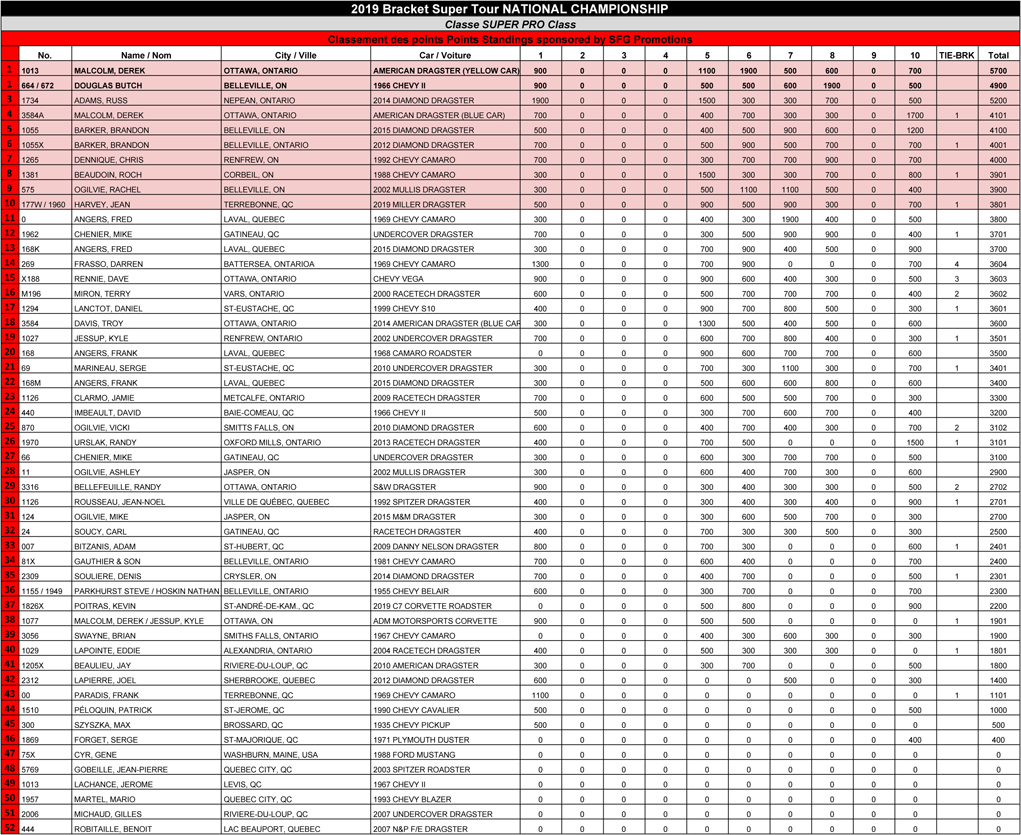 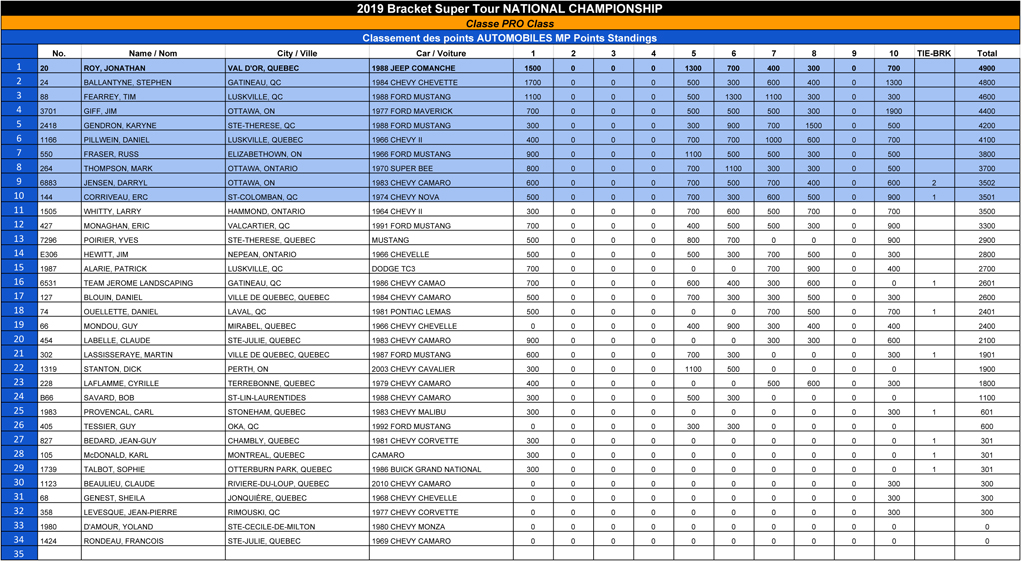