The first of three weekends for the Canadian Bracket Super Tour will be presented beginning this Friday at ICAR Mirabel. Since the announcement of this new Drag Racing Series earlier this winter, Super Tour Race promoters published a bunch of details that will establish a new standard in the world of Bracket Racing in Canada!

Friday activities
Several racers will arrive Friday afternoon to do some test runs and get a shot in the Gamblers Race early in the evening to prepare for the big weekend races. Gates will open at noon. Test & Tunes will be run at 4:00PM for $20. Eliminations for the Gamblers Race with a $50 entry will be at 7:00PM. No additional entry fees will be charged to racers and spectators arriving on Friday. The gate will close at midnight.

Payouts and fun guaranteed on every Super Tour weekend!
Gates will open at 8:00AM Saturday morning and the tests will be at 9:30AM. A Pit Meeting will take place at the base of the tower at 12:15PM followed by the first round of eliminations at 12:30PM. The race will finish at 17:00PM just in time for the Party! Sunday, two qualifications rounds will be held at 9:30 and eliminations will start at 11:45AM. General admission for crew and spectators is $ 25 per day or $ 40 for the weekend.

At all Super Tour and Bracket Finals events, payouts are 100% guaranteed by the Angers twins. Regardless of the number of registered cars, Super Pro and Pro Winners will respectively cash $5,000 and $ 2,000 as the top 16 racers in each class will be rewarded. $25,000 in payouts will be distributed during this first weekend only!

A ton of Racer Appreciation Giveaways!
With the help of its valued sponsors, Super Tour promoters will hand over $ 10,000 in gifts and giveaways to the members this season. Longest tow Bonus, Best Appearing Car Award, Frist Perfect Reaction Time in Eliminations, Bounty Bonus and even a drawing racers who will not have won a round for the weekend.

Big checks and trophies will be awarded to the winners in the Winners Circle!

Saturday evening will be held the famous BBQ dinner orchestrated by Chef André, Drag Racers premiere Cook! Hot Dog , grillades and drinks for all members registered in the points fund. The raffle of the MAC Tools toolbox for pre-registered members will be drawn in the evening.

Become a Super Tour member this weekend
There is still time to join the Super Tour. Even if you’re not sure to run all the events, you really should register! Only members will be eligible to the Racers Appreciation Giveaways and gifts. Non-members will only get 80% of the announced payouts.

Even more!
All registered members will receive an official Super Tour T-Shirt and a pair of stickers. The Super Tour will have a TV segment on the popular TV Show Festidrag.TV on air at RDS2 and also available on the web hosted by Martin D’Anjou! Junior Dragster class will also be in action at all Super Tour weekends, the winners also receive trophies!

Fans who cannot travel to ICAR this weekend will have Live Coverage from DragRaceQuebec.com on Facebook. Photos, videos and results will be published regularly throughout the weekend.

Live Ladders accessible on DragRaceQuebec.com at the Super Tour events
As announced earlier this year, Super Tour Racers will be randomly paired on a ladder before the first round of eliminations.

The Ladders for each categories will be easily accessible on the DragRaceQuebec.com home page by clicking on the LIVE LADDERS link at the top right under the Super Tour logo.

The LIVE LADDERS page is compatible with all computers or smart phones on the market.

After the first two rounds of eliminations, all buy backs goes to the bottom of the ladder where they run each other. If there’s an odd number of cars a round winner entry drops from the top of the ladder to run a Buy back entry.

First entry drawn go to the top of the ladder and gets the bye-run if odd number of cars. One bye run per driver unless everyone has had one. Bye run does not carries over into the next round.
A new ladder will be drawn before the quarter-finals. The winner of the first pair drawn will get the Bye run next round if odd number of cars left.

Rules
All races run on 1/8 mile, Throttle stops allowed in Super Pro, Traction control devices such as the Davis Traction Control are NOT ALLOWED, MSD 7531 or any ignition system with SLEW capabilities, all down track data recorder devices used to operated any and all of the above, Front wheel sensors or counters. No Transbrakes in Semi Pro/Pro, Line Locks and two steps are allowed. Buy Backs First or Second Round. Door Cars and Dragsters runs separate until the quarter-finals. A ladder is randomly drawn before the first round of eliminations. All buy backs goes to the bottom of the ladder where they run each other. If there’s an odd number of cars a round winner entry drops from the top of the ladder to run a Buy back entry. First entry drawn go to the top of the ladder and gets the bye-run if odd number of cars. One bye run per driver unless everyone has had one. Bye run does not carries over into the next round. A new ladder will be drawn before the quarter-finals. The winner of the first pair drawn will get the Bye run next round if odd number of cars left.Two drivers may drive one car. One driver can drive 2 cars or the same car twice. A driver can only go down the track 2 times total. Lane choice is determined by coin toss. If we have a rain out during a round, we will go to the previous completed round and split all purse money equally. Points will be allowed for completed rounds. In case of announced bad weather, entries and payouts could be grouped in one race. In this case payouts would be doubled for that only race of the weekend. The points will not be doubled. No rain dates except the Luskville weekend. Monday is a holiday. If your car breaks during eliminations you cannot use another car, however you do not need to make a time trial in a car that you enter first round with. Dial-in cannot be changed once you are called from the lanes to the burnout box. A 5 minutes waiting time will be allowed. If you’re not there in time, you will be eliminated from competition. You stage, you accept the dials. Driver’s responsibility to get the right dial-ins on the boards. No-re-run in case of dial-in errors. In case of a Timing System error there will be a re-run. In case of a re-run, racers are not allowed to change lines and dial-ins. No refund will be given to racers after the first round of eliminations begins. Autostart and crosstalk in effect. 300 points allowed for attendance, 200 per round won live, 100 per round won after buy backs. 30 for the Bounty.

Next races not to miss
The next Super Tour weekend presented by Pennzoil will take place on June 18-19, 2016 at Napierville Dragway. Also in July, two important races not to miss are the Downeast Nationals in Miramichi, New Brunswick on July 16- 17, 2016 and the prestigious Bracket Bonanza at Luskville from July 29 to 31, 2016. The third and final Super Tour weekend presented by NAPA Auto Parts will take place on September 3 and 4 at Luskville followed by the Canadian Bracket Finals at ICAR on September 23-25, 2016.

For more informations
Have any questions? You can join co-promoter Fred Angers by email at angersracing@hotmail.com or text/phone at 514-909-7108. 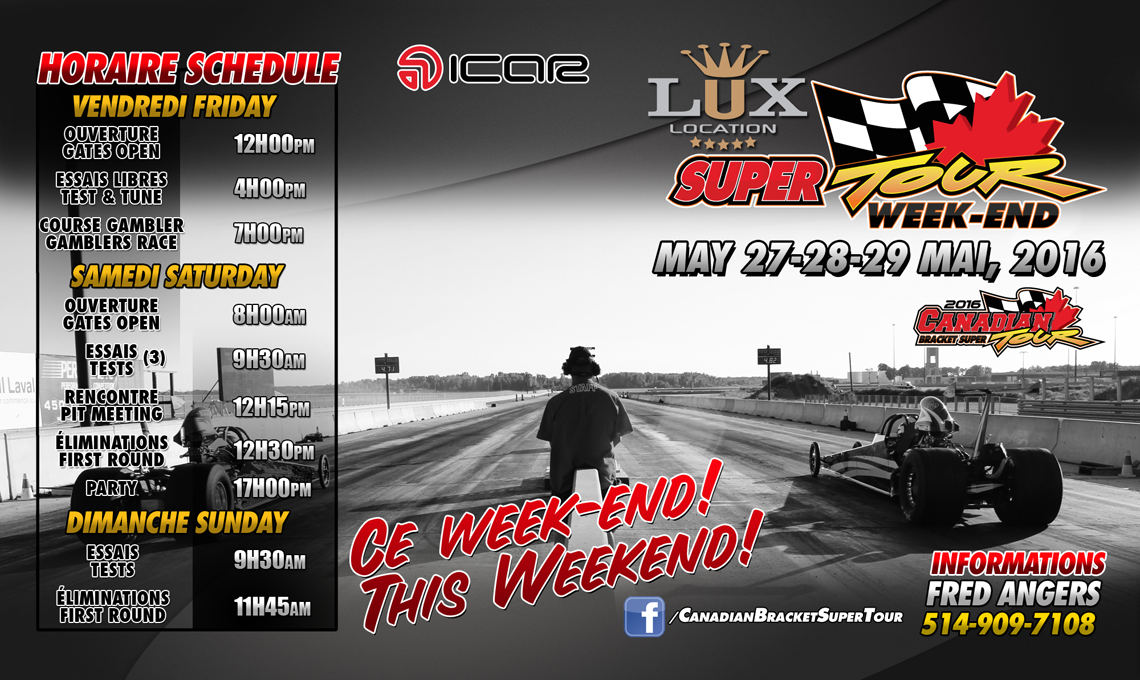