A lot of racers were looking forward to this long Labor Day weekend as the 5th and 6th rounds of the Super Tour National Championship presented by NAPA Auto Parts in collaboration with Ogilvie Auto and Para Performance were held in Luskville Dragway.

The program began Friday night with two gambler’s race for Super Pro and Pro racers. Defending Super Pro National Champ Kyle Jessup went on for the victory and Éric Monaghan from Quebec City got the win on the Pro side.

The rain was definitely going to crash the party on Sunday, race director Arnie Malcolm made the decision to go for two races in one day. A total of 136 entries were registered, 66 cars in the Zerex Super Pro category, 60 in the Pennzoil Pro category and 10 in the AC Towing Jr Dragster category.

As expected, the cars were on track at 9:00 am with two time runs followed by the eliminations of this 5th championship race. In the middle of the afternoon, after six eliminations rounds in the Zerex Super Pro category, Troy Davis from Ottawa went on with a 3-thou package to eliminate Jay Beaulieu from Rivière-du-Loup on the dragsters side and Darren Frasso from Belleville had the advantage over Roch Beaudoin on the door car side. Troy Davis then won the Zerex Super Pro final thanks to a perfect reaction time, dead-on with a 4 run. 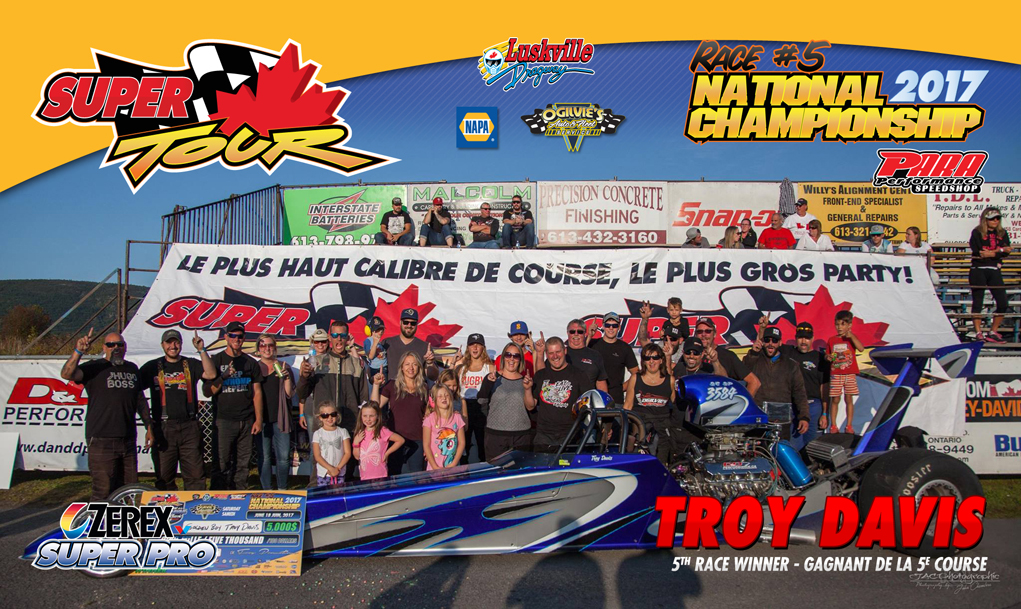 In the Pennzoil Pro category, Dick Stanton from Perth, Ontario had the advantage over Max Blouin from Quebec City while Jason Laporte from North Bay had the bye to the finals. Dick Stanton then won the final round against Laporte. 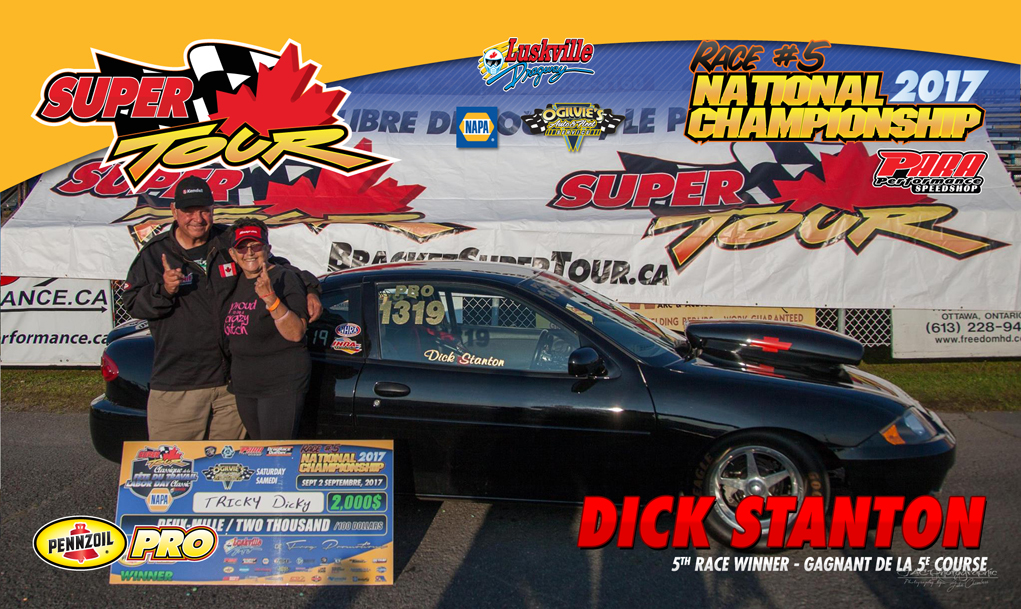 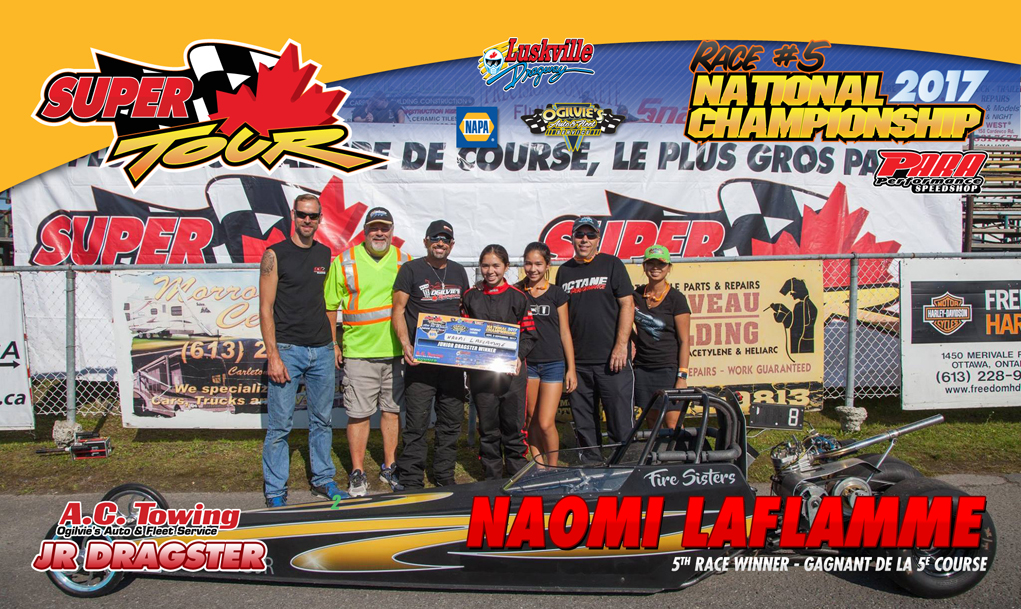 Right before the semifinals of the first race, all racers were given a time shot for second race which was held in the evening.

In the Zerex Super Pro class Magic Mike Ogilvie from Jasper, Ontario got the best out of defending champion Kyle Jessup in the semi-final while Dwayne Schultz from Pembroke, Ontario had the bye. In the final, Mike Ogilvie won the 6th and last race of the national championship while Schultz was red by a couple of thousands. 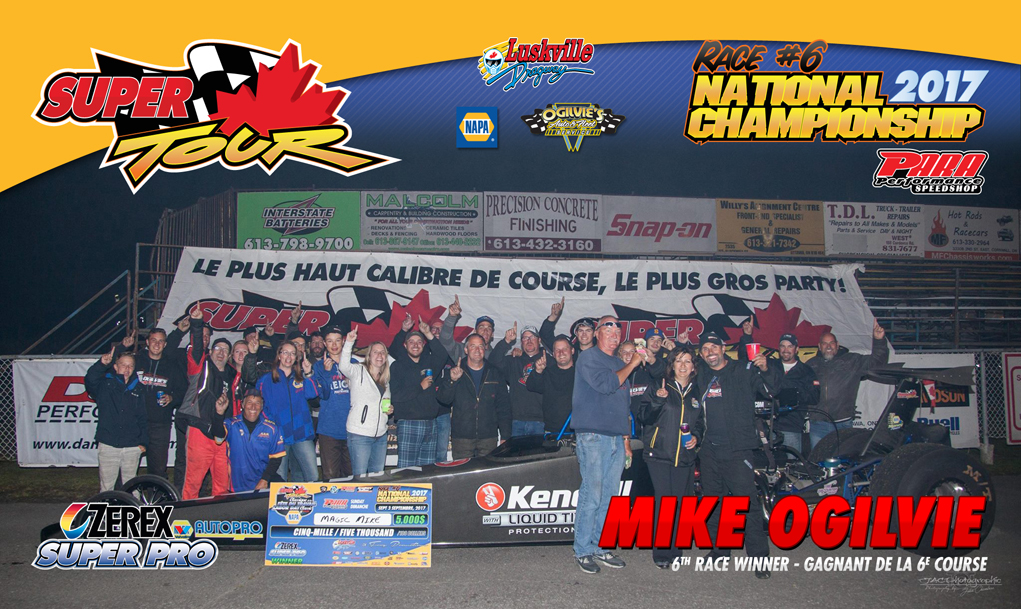 In the Pennzoil Pro category, local hitters Stephen Ballantyne from Aylmer and Patrick Alarie from Luskville faced each other in the semifinals while young Ballantyne had the advantage to reach the final. On the other side of the ladder, Rookie Ashley Muttart from North Bay had the bye. Stephen Ballantyne then won the final round against Muttart. 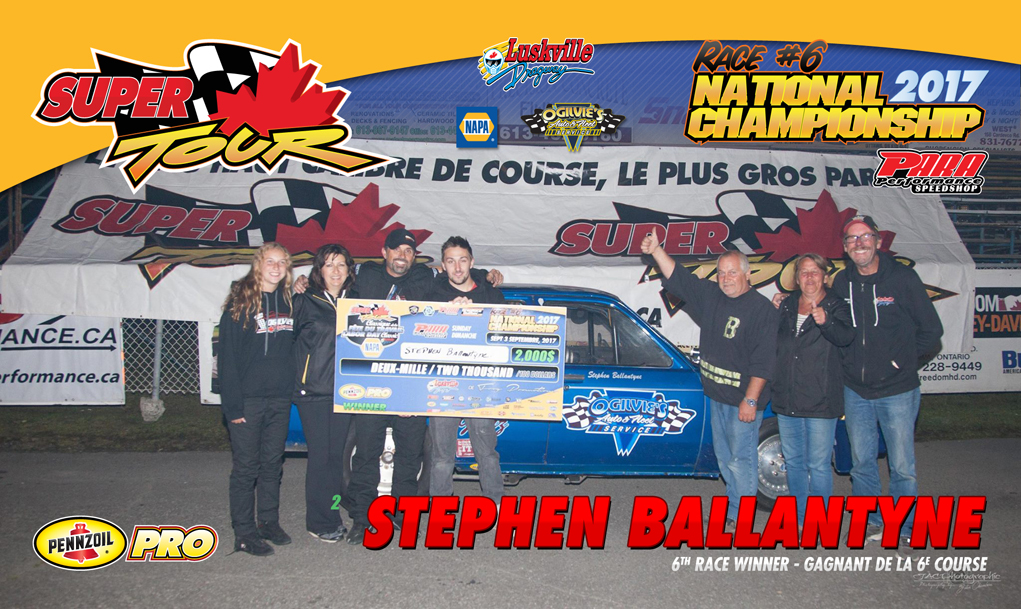 In the AC Towing Jr Dragster category, Julien Laporte won the race against Ryan Clarmo who reached a second final on the same day! 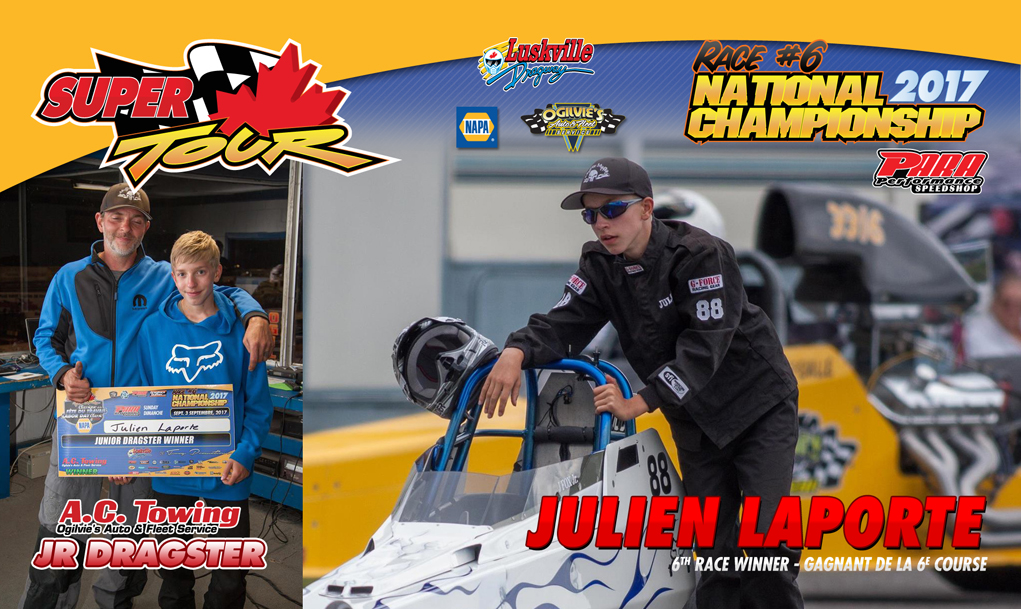 A real marathon ended at 10:58pm exactly 2 minutes before the mandatory curfew! Nearly 650 passes per race lane were recorded during this day, a record at Luskville Dragway.

The Super Tour season will end in a few weeks at ICAR Mirabel with the Canadian Bracket Finals from September 23rd to 25th. The races presented during this weekend will no count for the national championship since the first 6 races of the season have been completed.

Stay tuned on DragRaceQuebec.com and on BracketSuperTour.ca to find out who the 2017 champions are! The results will be published later this week!