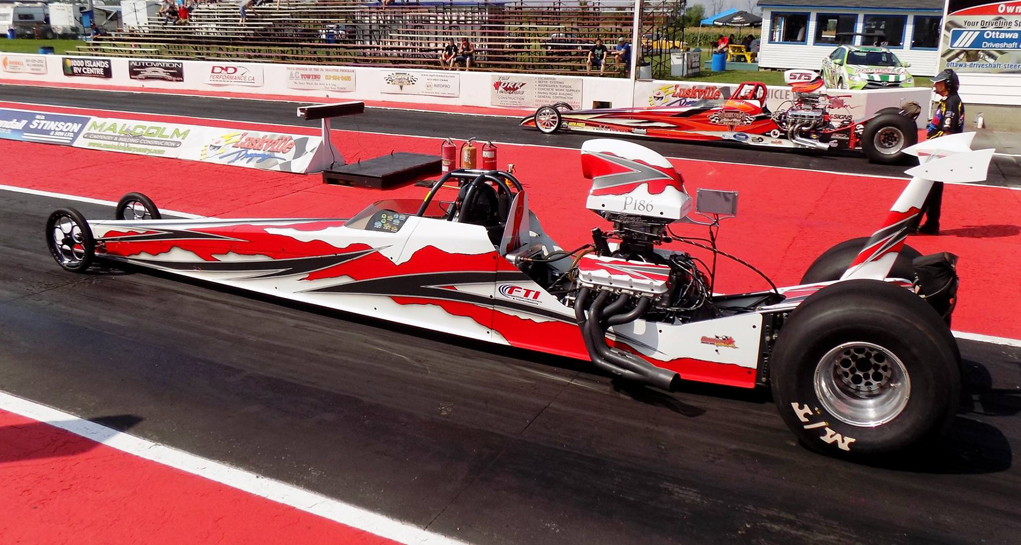 The prestigious Bracket Bonanza was back for it’s 38th edition a couple of weekends ago at Luskville Dragway. This year, the race was presented in conjunction with the 5th and 6th rounds of the 2018 Super Tour National Championship.

More than 135 racers per day were on the property during this weekend presented by Jerome Landscapping. The activities began Friday with the traditional D&D Performance Big Dog 48 car Shootout where John Simeoni came out on top for the door car fans defeating Randy Bellefeuille in the final taking home the $8,600 winner takes all prize. 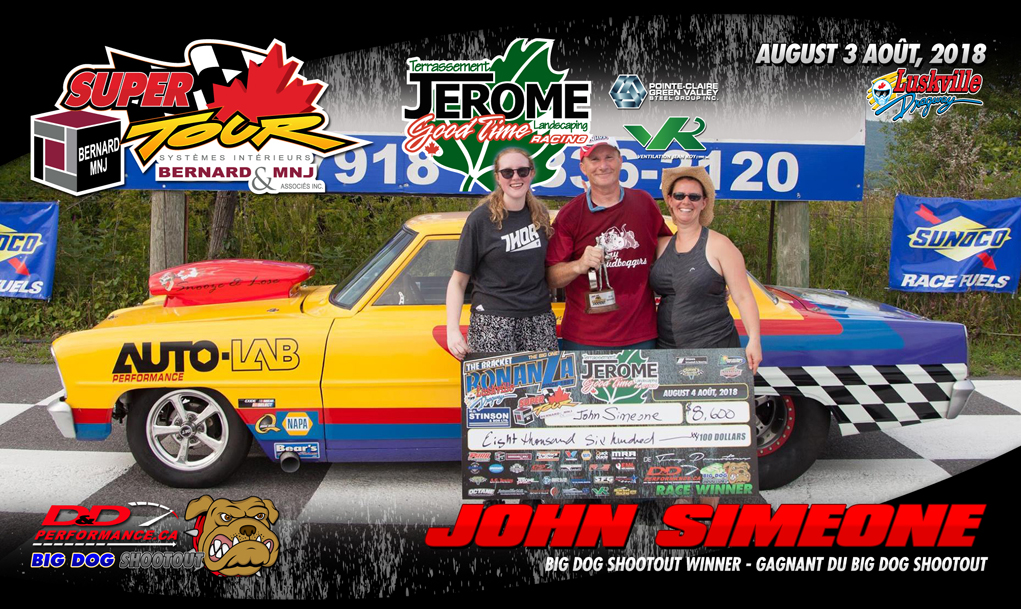 A $500-entry High Roller race was also presented where Denis Soulière won against veteran racer Richard Arnold for a $ 4,000 payday. 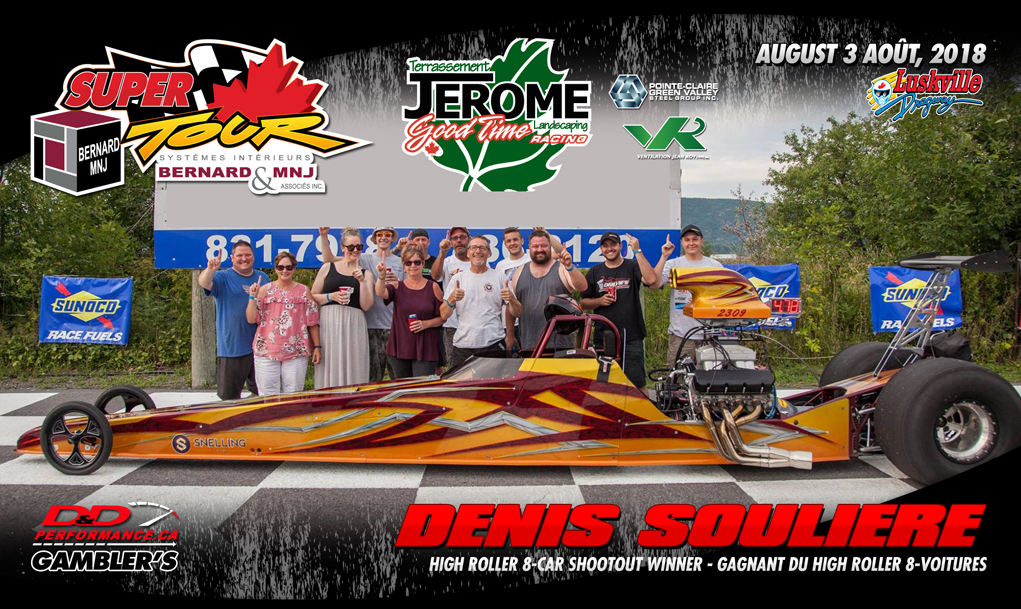 The famous Golf Cart race was held on Friday night. Former Super Tour National Kyle Jessup won the race that ended late in the evening where over $1,500 was up for grabs!

The main event of the weekend was presented Saturday while $ 10,000 to the winner was in play for the Super Pros presented by EML Mécanique. In the end we saw Butch Douglas from Belleville, Ontario with Diamond Dragster taking the big win over Phil Panaritis from Montreal with his Camaro. Vicki Ogilvie from Jasper, Ontario made an excellent performance by losing in the semi-finals. 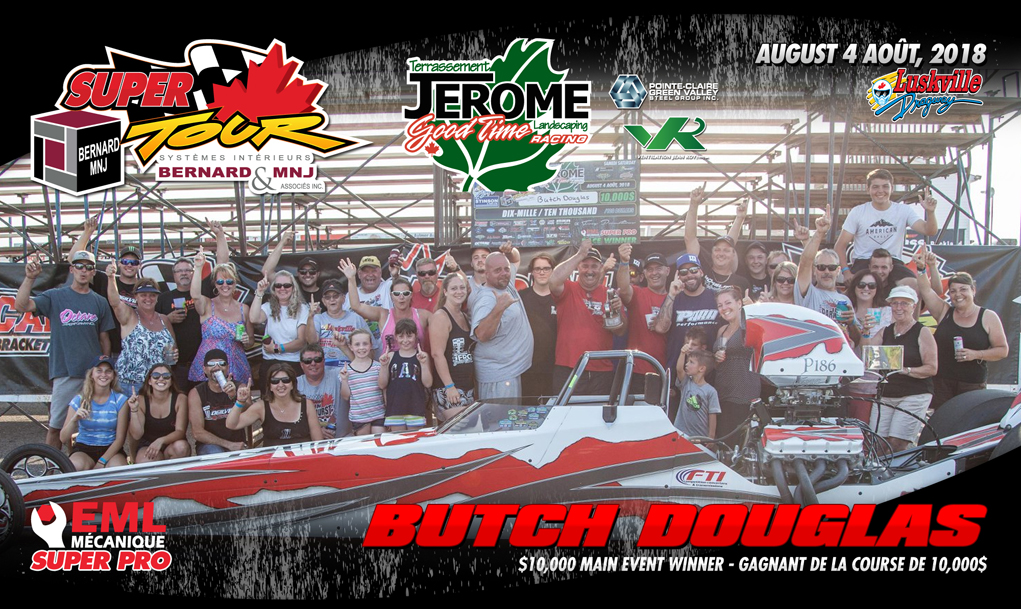 On the Quick Blade Pro side, the Iceman Martin Lassiseraye from Quebec City took the top honors with his small tire Mustang against Ottawa’s Jim Griff. Yves Poirier from Montreal was the semi-finalist. 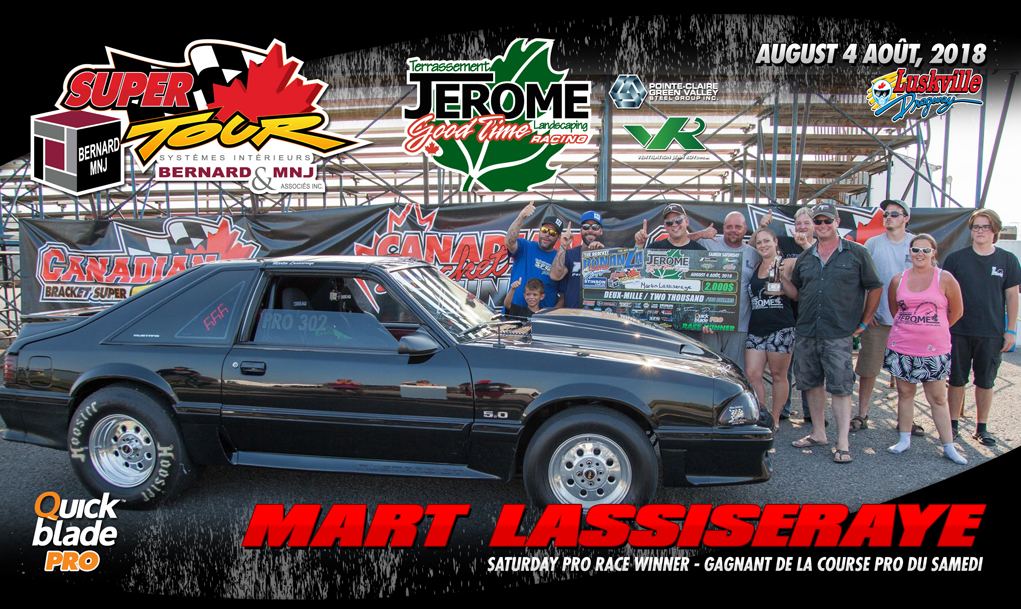 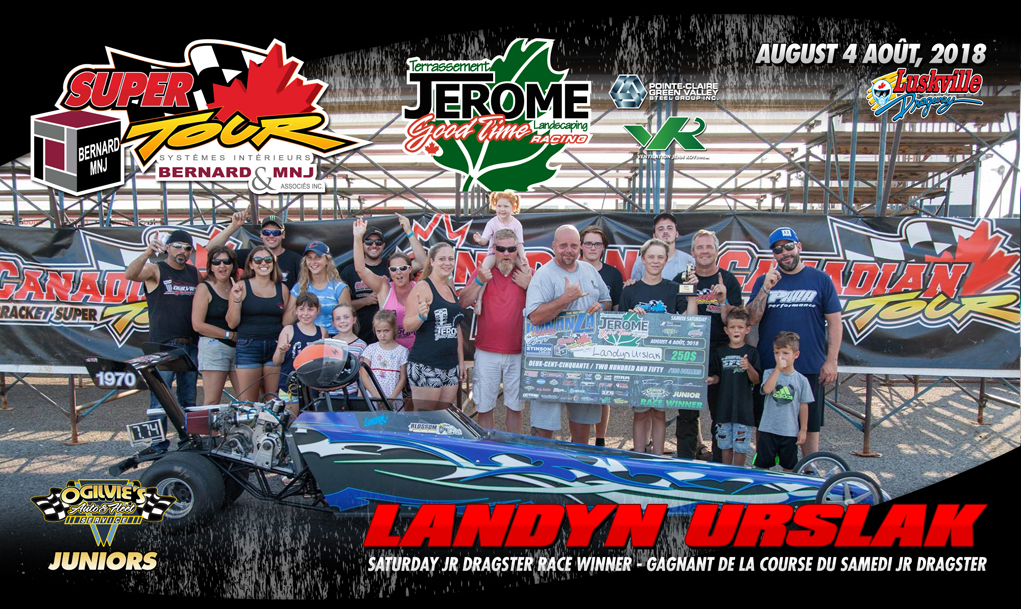 The festivities continued till early Sunday morning with the steak dinner, the grill and the MRA party in addition to the Ambush music group performance.

All classes were back on track Sunday. In Super Pros, Brandon Barker from Belleville won the $5,000 race over André Ballabey from Montreal. The semi-finalist was Frank Angers. 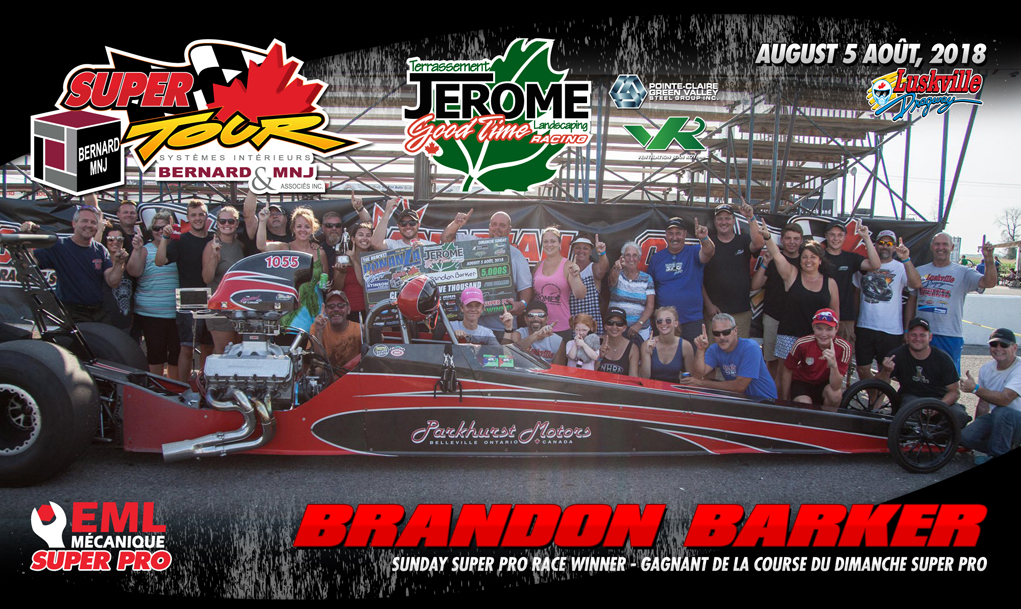 In the Quick Blade Pro category, Eric Corriveau from St-Colomban snatched the win from Jessica McEvoy. Dan Pillwein was the semi-finalist. 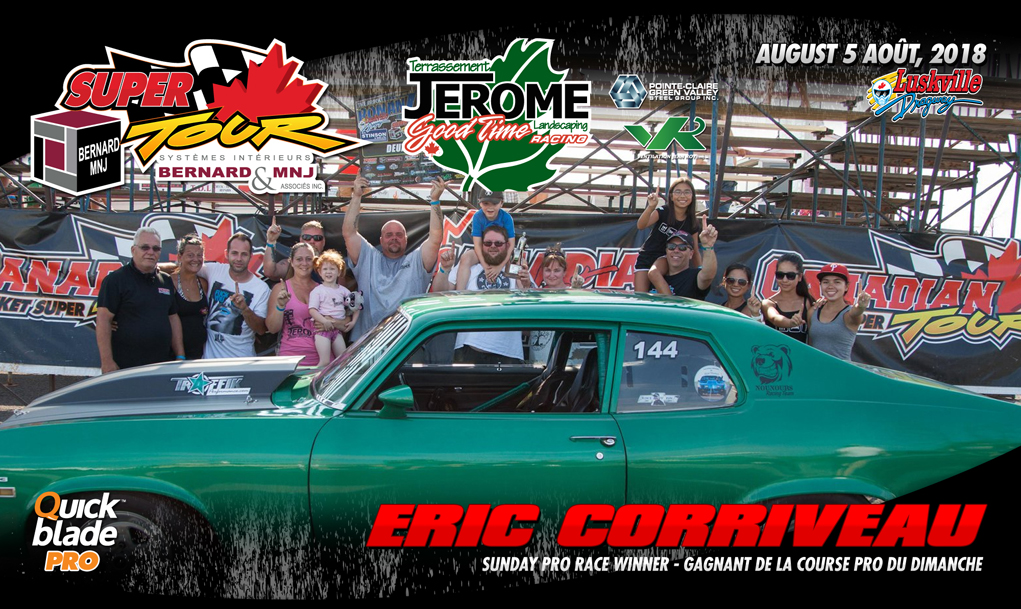 In Juniors, Landyn Urslak went double, winning both races this weekend in front of championship leader Felix Ballabey. Olivia Vannopen and Julien Laporte were the semi-finalists. 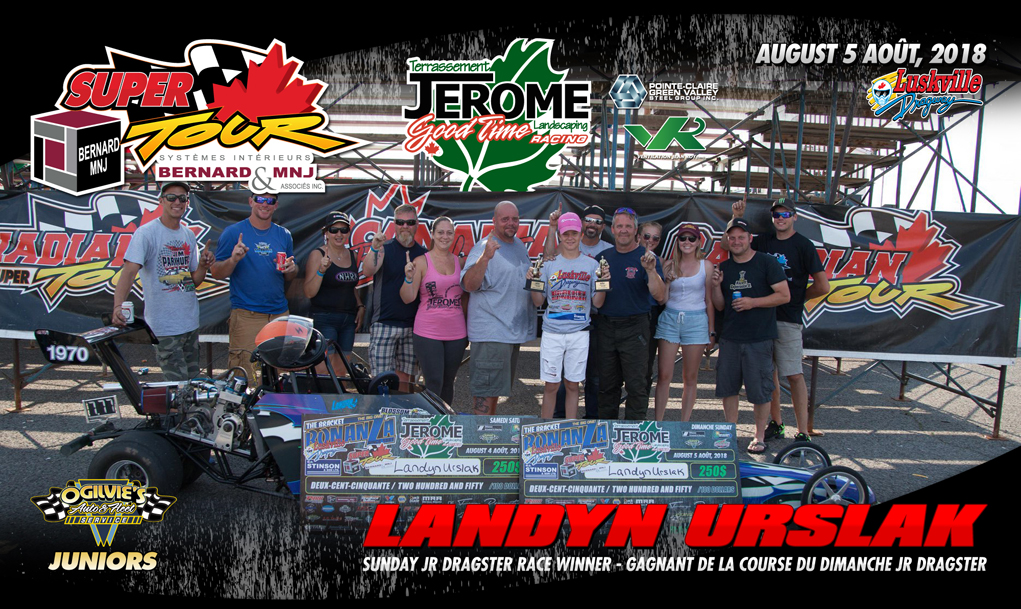 Several giveaways are awarded to members during Super Tour weekends. The Octane Performance bounty bonuses were awarded to Mike Reynolds and Stephan Ballentyne for the previous race’s winners in their respective categories. Frank Mark Jr. from Newton, New Jersey won the NAPA / Valvoline Long Distance Award with a 650km trip to participate in the Super Tour. The NAPA BodyPro Best Appearing car was awarded to Richard Arnold with his brand new Miller Race Cars and the ThisisBracketRacing.com Bad Luck Bonus went to Kevin Poitras and Yvon Chabot.

With a big LIVE victory at race #5, Butch Douglas from Belleville, Ontario takes the lead for the EML Mecanic Super Pro Championship. He is ahead of the 3rd race winner Richard Arnold from Terrebonne, Quebec. Roch Beaudoin from North Bay is doing well taking the third position with his Camaro. Frank Angers from Laval is now fourth with his Diamond Dragster and Darren Frasso from Belleville completes the top 5. 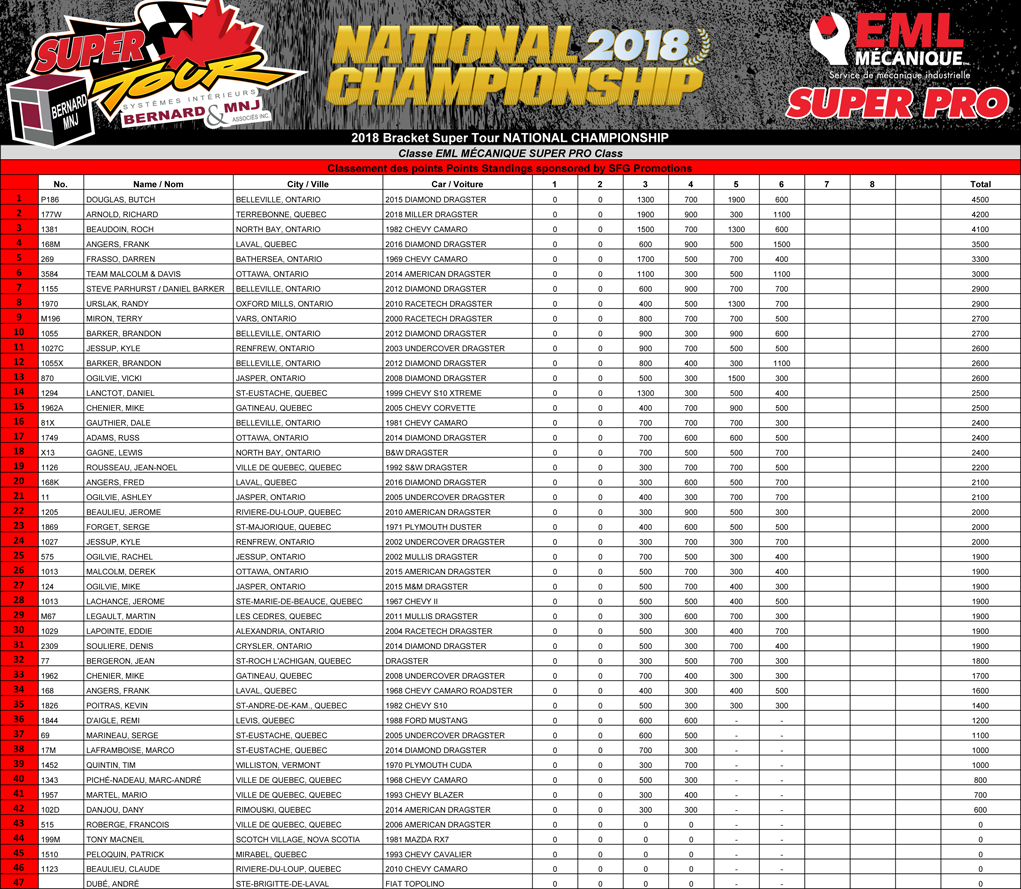 In the Quick Blade Pro category, Martin Lassiseraye from Quebec City, winner of the 5th race, is at the top of the standings ahead of Dan Pillwein from Ottawa who won the 4th race. Eric Corriveau from St-Colomban who won the 6th race is third ahead of the race #3 winner, Mike Reynolds. Daniel Blouin from Quebec closes the top 5. 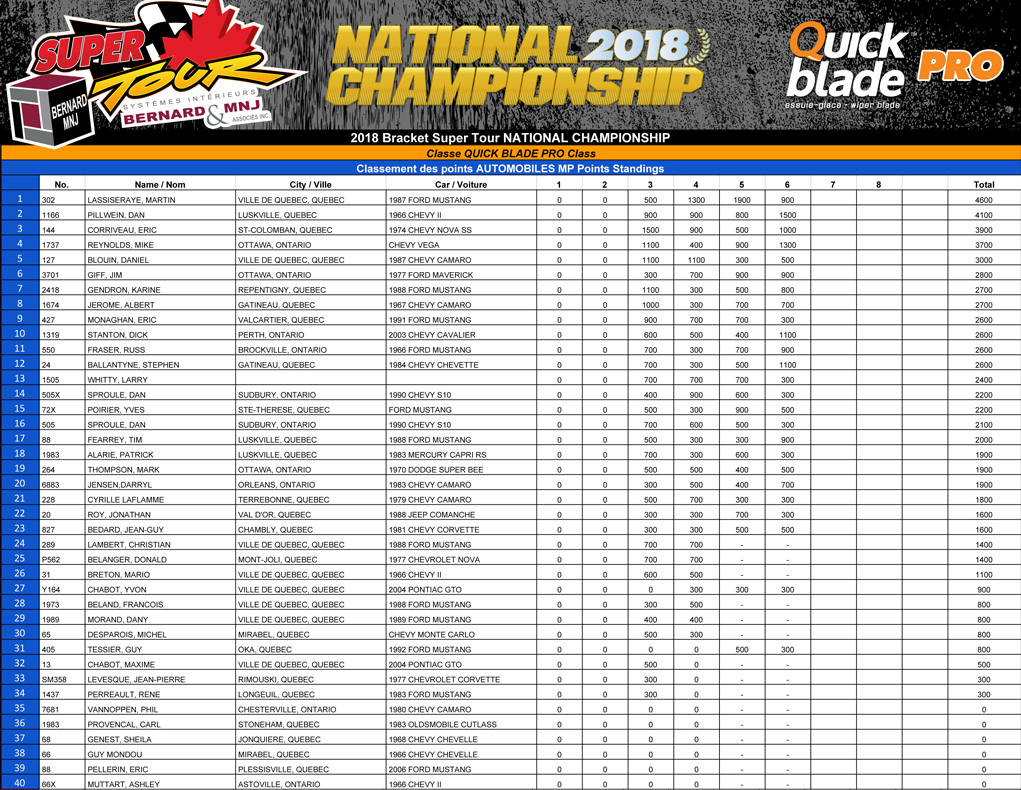 The last two rounds of the Super Tour national championship will take place on September 1st and 2nd at Luskville Dragway.

The Super Tour will then travel to ICAR Mirabel for the season ender on September 22 to 24 as part of the Canadian Bracket Finals! 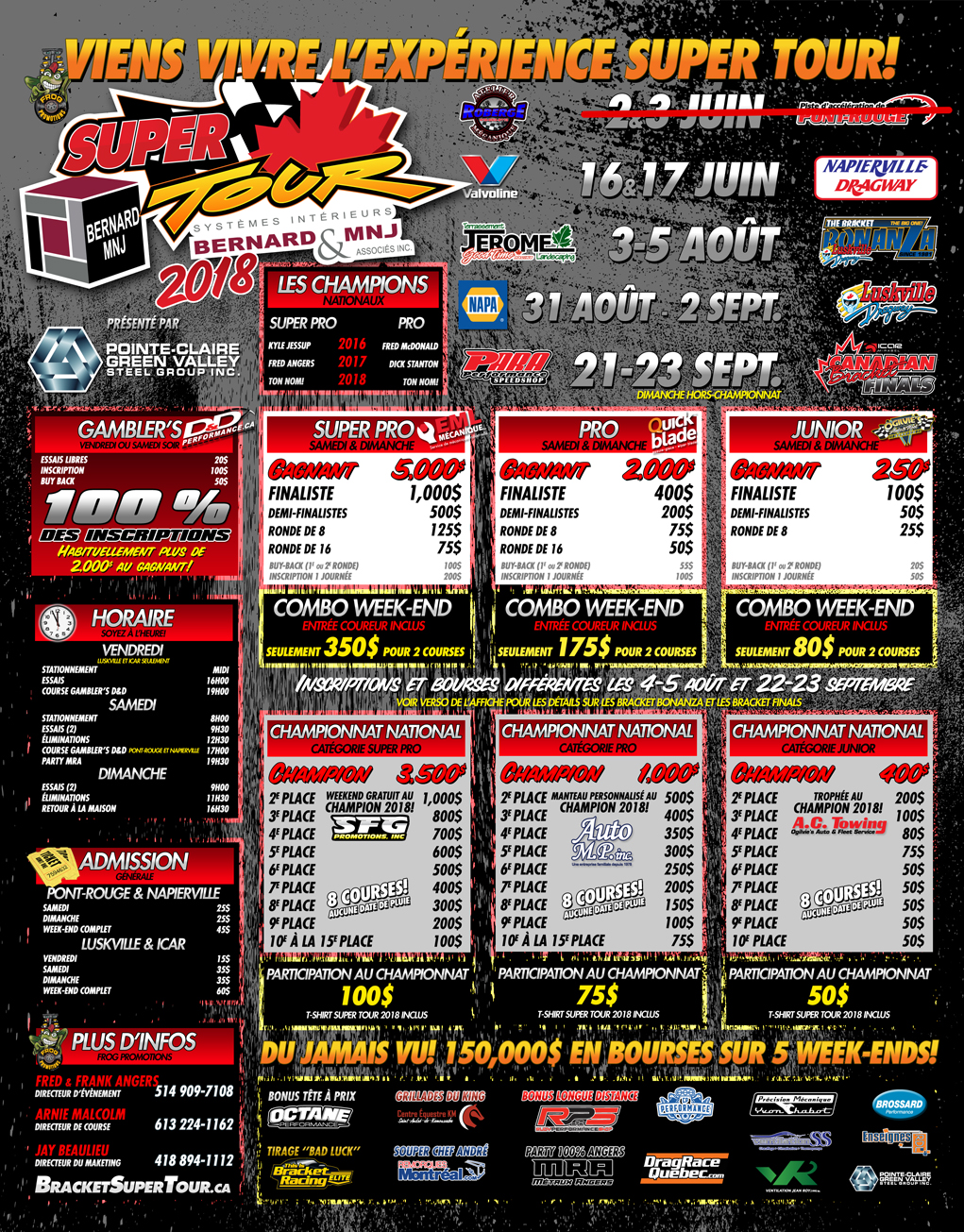