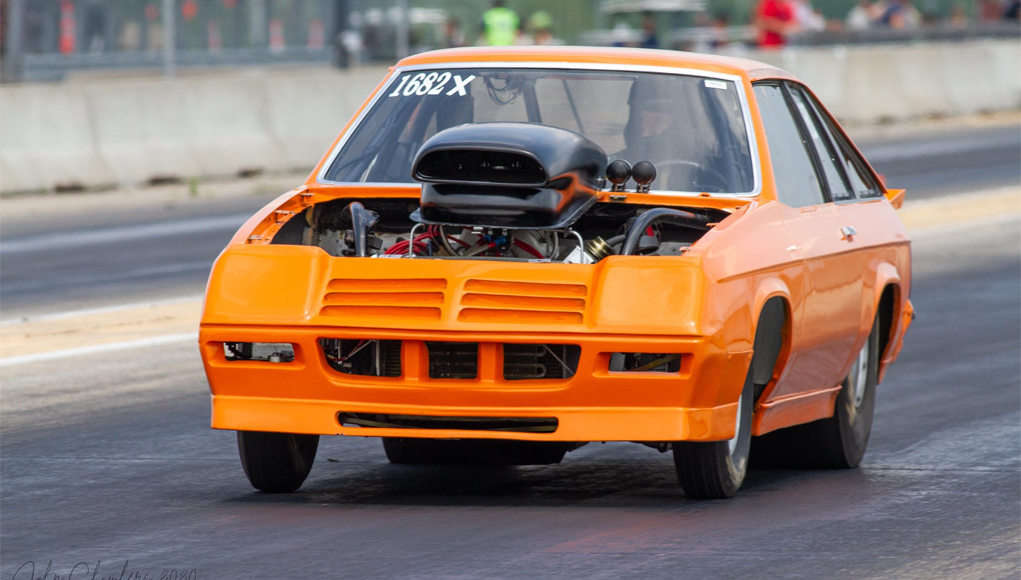 Some will say, Finally! The 2020 Bracket Super Tour season started a few weeks ago at the ICAR Complex in Mirabel. The promoters were anticipating a good turnout despite the restrictions imposed with the COVID-19 situation.

108 entries were registered for this season opener with 56 entries in Super Pro, 38 in Pro and 8 Juniors.

Brian Acker wins round one

Acker from Inverary, Ontario, a new first time Super Tour member won the first round in a breathtaking final against Super Tour CEO Fred Angers who’s .005 on the tree, dead-on with a 5 wasn’t good enough for the Ontarian who layed down .005 total with his Dodge Omni Door Car.

Acker first knocked out defending National Champion Derek Malcolm, while Fred Angers took out the dangerous Brandon Barker on his way to the final round.

Local racer from Northern Montreal region, Eric Corriveau starts his season strong as he takes the win over Mike Reynolds from Ottawa. Corriveau, who since the inception of the Super Tour has consistently finished in the top 10, is sure to stand a chance once again for the National championship title again this year.

Corriveau, 44, was the vetenan of the four semi-finalists as the youngsters are taking over the class. He knocked out second-generation driver Dan Pillwein in the semifinals while Reynolds had the upper hand over another promising racer Stephan Ballantyne.

Brian Acker was unbeatable once again on Sunday with a second win in a row this time against Montreal driver Adam Bitzanis. 2016 National Champion Kyle Jessup was the lone semi-finalist as Andre Ballabey and young Landyn Urslak advanced to the quarterfinal round.

An unpredictable scenario in the Pro class when the same two racers both got to a second final in a row. Ottawa’s Mike Reynolds had the chance to get his revenge against Eric Corriveau and that’s exactly what he accomplished by knocking out the previous day winner. Corriveau eliminated his good friend Daniel Ouellette in the semifinals.

The Junior category was the business of the Monaghan family on that first weekend. In an all-women final, Lea Monaghan had the advantage over Madison De Jong and on Sunday Trevor-James Monaghan had the upper hand over Xavier Magny.

Adam Bitzanis on top of the hill

A great weekend for Montreal driver Adam Bitzanis places him at the top of the Super Pros points standing with a 200-point lead over Red Hot Brian Acker. Bitzanis reached the round of 16 on Saturday and lost in the final on Sunday. André Ballabey from St-Michel is in 3rd position, 600 points behind the leader. The fourth and fifth position are occupied by the Angers twins who are 800 and 900 points behind Bitzanis.

Corriveau and Reynolds tied on top

The only two racers who took part in both finals of this first weekend are tied for the lead. Eric Corriveau and Mike Reynolds each ccumulate 2,600 points. Sunday semi-finalist Daniel Ouellette is third just 200 points behind the leaders. Patrick Alarie is fourth with 1,700 points while Noémie Ballabey and Stephen Ballantyne complete the top 5 with 1,600 points.

As you know, Super Tour members enjoy a ton of benefits. This season, 117 racers entered the championship. Here are the giveaways awarded during this weekend.

The raffle for the NAPA Carlyle Tool Box courtesy of Atelier Mécanique Roberge was won by Randy Urslak from Oxford Mills, Ontario.

The Super Tour promoters in collaboration with Métaux Angers also offered two checks of $ 500 each due to the goal of 100 members reached this season. In the Pro class it was Steeve Magny from Amos, Quebec who took the money and in the Super Pro, Carl Soucy from Gatineau.

A new partner is now associate with the Super Tour. AC Hydraulic went with an out of the box giveaway and offered a 6 pack of beer to the first racer with a 6 thousandths package. André Ballabey from St-Michel won the award. The Valvoline Long Distance bonus went by Chris Van Baalen all the way from Weelandport, Ontario.

Terrassement Albert Jerome awarded $ 250 to the racers with the best reaction times from the first round of eliminations on both days. In the Super Pro category, Troy Davis and Terry Miron and in the Pro category, Martin Lassisseraye and Jean-Guy Bédard won the bonus.

Next round this weekend!