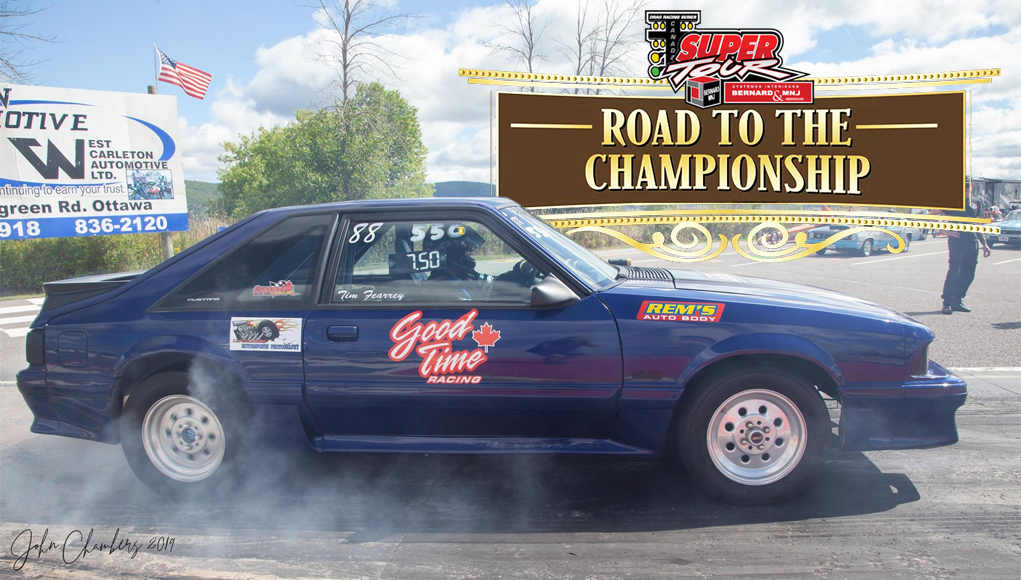 The Drag Racing season in Eastern Canada ends this weekend at ICAR Mirabel. The 2019 Bracket Super Tour National Champions will be crowned as several racers still have a chance to win it all in their respective category.

In Super Pro, Ontario’s Derek Malcolm leads the way with a total score of 5,000 points. Malcolm racked up the majority of his points when he doubled up in August at the prestigious Bracket Bonanza winning both Saturday’s 10K race and Sunday’s 5K race.

Russ Adams is in second place with 4,700 points, only 2 rounds behind the leader. The Ottawa runner won the first race of the season at Mirabel.

Butch Douglas from Belleville has a 3-round deficit from the leader with a total of 4,400 points. Douglas is the leader on the ”Door Cars” side thanks to a win at the last event in Luskville.

Rachelle Ogilvie is in fourth place. The young driver reached the semifinal twice in the last three races to collect 3,500 points. She will have to go 8 rounds further than the leader to become the first female National Champion.

Danny Lanctot is the best Quebecer this season. The St-Eustache racer is ranked fifth with a score of 3,304 points. Lanctot lost in the final of the main event at the Bracket Bonanza.

Defending class champion Brandon Barker is currently in sixth place just one point behind Lanctot. Barker lost in the final of Saturday’s race in Luskville earlier this month. He will have to win 9 more rounds than the leader this weekend to defend his title.

The 2017 champion Fred Angers (7), Chris Dennique (8), Mike Chenier (9) and 2016 champion Kyle Jessup (10) complete the top 10 with a one-point difference between each position. These drivers will also have to win 9 more rounds than Malcolm to win the title. 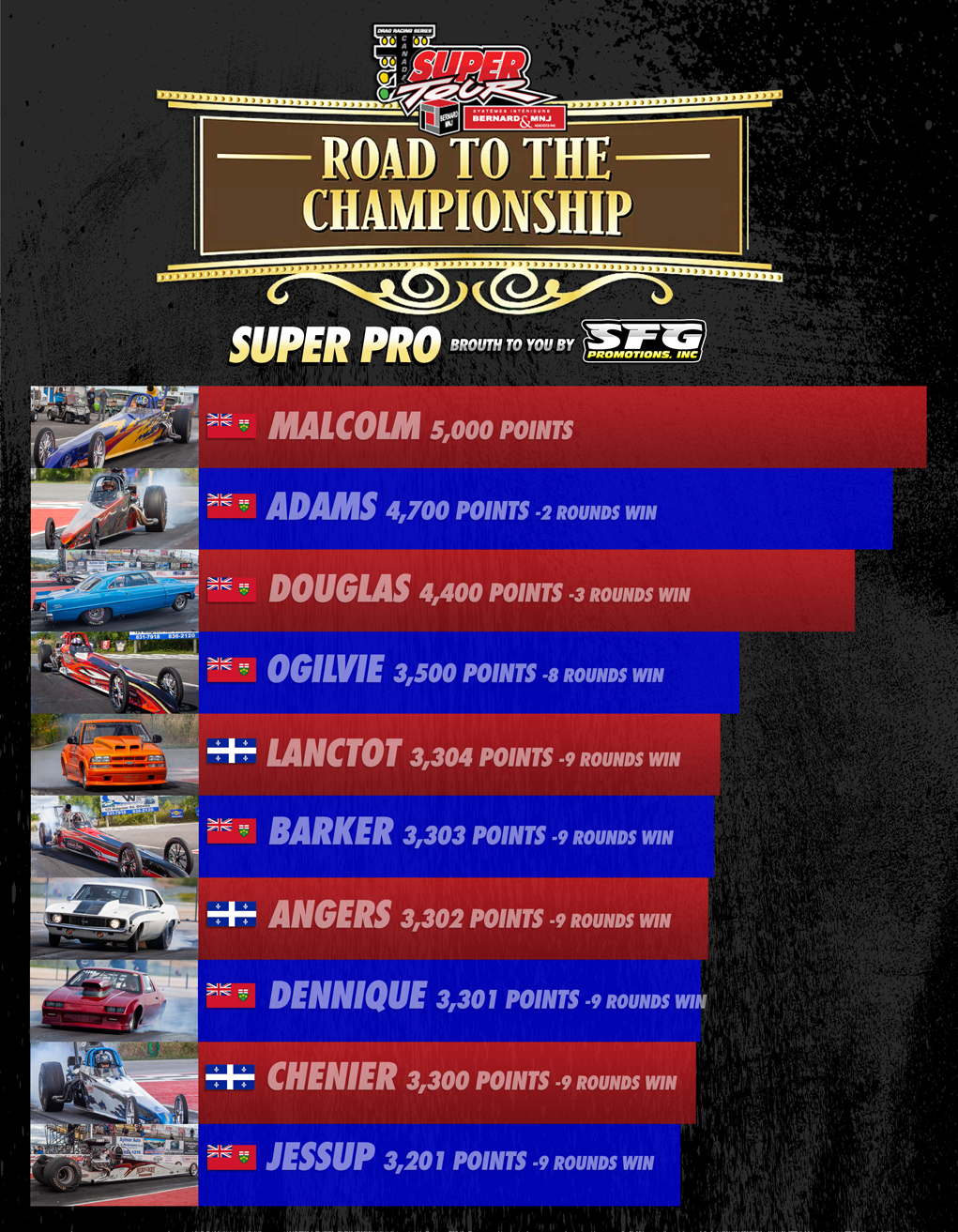 In the Pro category, Tim Fearrey is the leader thanks to three semi-finals appearances this season. He have a score of 4,300 points.

Jonathan Roy who led the field for most part of the season is only one round behind Fearrey. The Val d’Or racer reached the final at the first race of the season and was Saturday’s semi-finalist at the Bracket Bonanza.

Karyne Gendron from Ste-Thérèse, QC is in third position with a final round appearance at the last race. She cumulates 3,700 points only 3 rounds behind the leader.

The winner of the first racer this season, Stephan Ballantyne is in 4th position with a total of 3,500 points, 4 rounds from the leader.

Dan Pillwein gets a total of 3,400 points. The Aylmer driver won a race this season and is 5 rounds behind.

The top 10 ranking in Pro is completed by Russ Fraser, Mark Thompson, Darryl Jensen, Larry Whitty and Eric Corriveau. These drivers all have chances to win the drivers’ championship with good performances this weekend at Mirabel.

Several racers who were not registered to the championship have done well this season. Mike Reynolds is one of them with a win and a runner-up. Noémie Ballabey and Mike Bélanger with a win each and Glen Tandy and Wes Clarmo with a runner-up each.

The fight will be on this weekend in Mirabel as the two racers from the Canadian Bracket Finals will be compiled for the 2019 championship! Do not miss the biggest event of the year in Quebec! More info at BracketSuperTour.ca 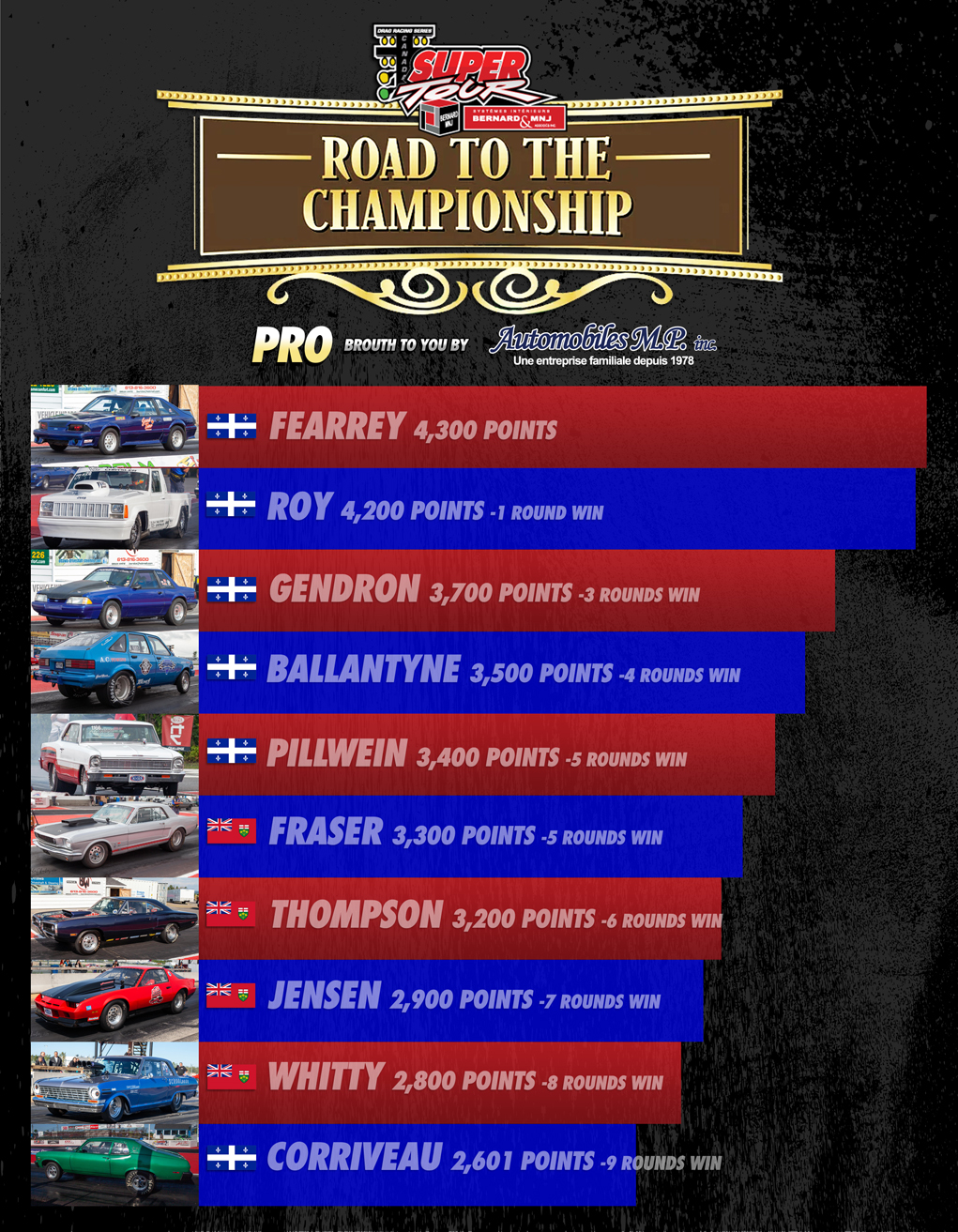