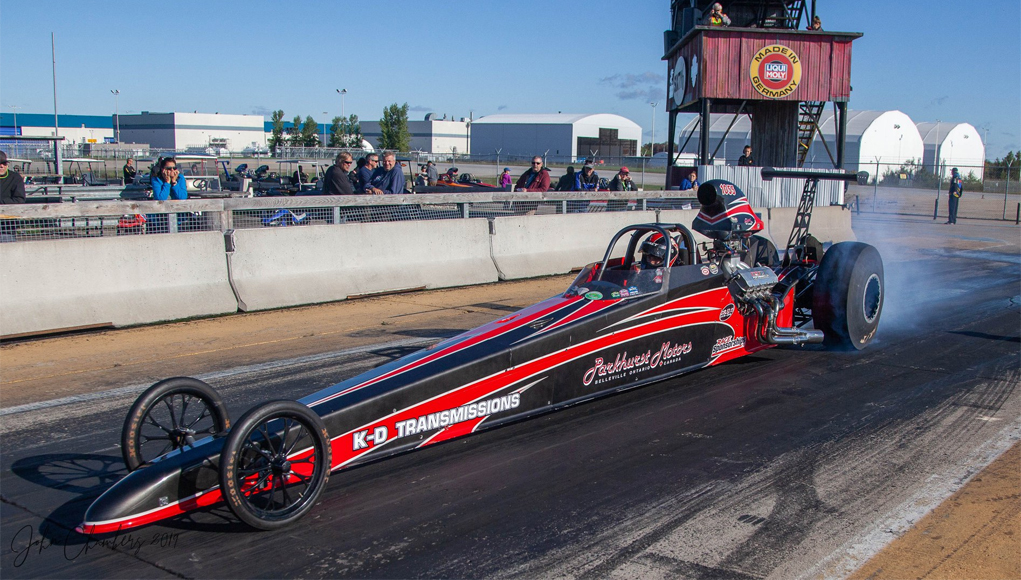 The most anticipated event of the year was held last weekend. The 5th annual PARA Performance Canadian Bracket Finals were presented as part of the Bernard MNJ Bracket Super Tour at ICAR Mirabel. The event presented by Atelier CP Performance and Raymond Paquette MAC Tools is now a must for bracket racers in Eastern Canada!

Although weather forecast was not really encouraging for Saturday, racers showed up in great numbers for this weekend in Northern Montreal. On Friday, 35 racers were registered in the High Roller Race presented by Octane Performance. Rookie Carl Soucy from Gatineau was the winner of this race against Jason Chatwood from Belleville and took home the $ 5,000 to win payout. In the Footbrake Gambler’s Race Eric Monaghan from Val Cartier took the win against Dan Pillwein from Gatineau. 24 cars were competing in this race.

Saturday morning it was obvious that Mother Nature would not be cooperative. At the racers meeting, promoters announced the new game plan and the redraw of the payouts will keeping the same total in payouts, bonuses and giveaways for the following day of competition. A reaction time competition was held in the afternoon as Frank Mark Jr. got the win over Kyle Jessup.

Sunday morning, at 8:30 cars were on the track while a record number for ICAR of 75 Super Pros and 58 Pros entries was recorded.

In the quarter finals for the Super Pro category, defending national champion and winner of the last two years, Brandon Barker had the bye-run while five racers were still in action. Derek Malcolm had the advantage over Randy Urslak and Jason Chatwood eliminated Rock Beaudoin. In the semifinal, the bye-run went to Chatwood and Barker took out Malcolm. The finale for $ 15,000 to the winner opposed defending event champion against the runner-up from Friday’s High Roller Race. Brandon Barker got it over Chatwood and signed the big win at the Bracket Finals for the third year in a row! The Belleville, Ontario racer add this 15K win to the 10K wins at this same race last year and in 2017!

A must win for Jim Giff
In the quarter-finals from the Pro category, Dany Morand from Quebec City eliminated Stephen Ballantyne from Luskville, Noemie Ballabey from St-Remi had the advantage over Christian Brisebois from St-Lin while Jim Giff from Ottawa had the bye-run. In the semifinal, Giff eliminated Morand while Ballabey went straight to the final. Jim Giff then won the final round, a major win without any buy-back for the racer who significantly improved his final score in the championship.

Mario Gourgue Top Sportsman champion
Veteran racer from Pont-Rouge, Quebec Mario Gourgue won the top honors in the Top Sportsman category. Gourgue had the better of Michel Bastien in the final round. Six cars were entered in the category and gave spectators A Show! 100ft burnouts and record setting elapsed times! Every racers present expressed interest in having the class back next year.

Jason Chatwood, the best of the weekend
Jason Chatwood wins the 2019 Canadian Bracket Finals M.V.P Title! The Belleville, Ontario racer won 16 rounds by competition and went to both finals on Friday and Sunday wheeling his Oldsmobile Cutlass ” Rocket Revival’’. His son Dylan won the Junior class win against Trevor Monaghan, concluding a dream weekend for the family! Jason Chatwood received a BE Pressure washing machine for his performance.

Bonus, gifts and party!
Every year, racers travel in large numbers to participate to the Canadian Bracket Finals. Everybody finds something for their money; a high level of competition, very good payouts and especially a lot of giveaways and bonuses in addition to the Angers Fun Party on Saturday night. Here is a summary of the racer appreciation giveaways.