The first season of Canadian Bracket Super Tour is now over. With the high popularity obtained, there is no doubt the series will return next year! Confirmed by Super Tour promoters this week, at least one more weekend will be added to the schedule in 2017.

Four weekends should be at the schedule in addition to the Canadian Bracket Finals in September to close the season.

The results of this first year are impressive! Before the season have begun, 66 Super Pro Racers and 36 Pro racers joined as members. Despite uncertain weather forecast for the first weekend at ICAR Mirabel, over 120 entries were recorded daily. The temperature was perfect in the second weekend in Napierville while more than 140 racers participated. All records have been shattered at last weekend presented in Luskville in September. 170 entries were registered to this event.

This superb season wouldn’t have been possible without our valued sponsors. A Special thanks to all of them:

Frank Para and the Angers Twins at PARA Performance, the official sponsor of the Canadian Bracket Super Tour.

The Beaulieu Family at Octane Performance.

Mike and Vicki at AC Towing.

The Brunet family in Napierville, the Malcolm family in Luskville and the Arsenault family ICAR.
A big thank you to you guys!

Kyle Jessup from Renfrew, Ontario and Fred McDonald from St-Sulpice, PQ were the first to break the ice by winning the first round in their respective categories. Both racers kept the pace throughout the season to finally be declared Super Pro and Pro National Champions at the last weekend!

The second round of the ICAR Weekend was won by Dale Gauthier from Belleville, Ontario in the Super Pro class and by Martin Lassiseraye from Beauport, PQ in the Pro category. 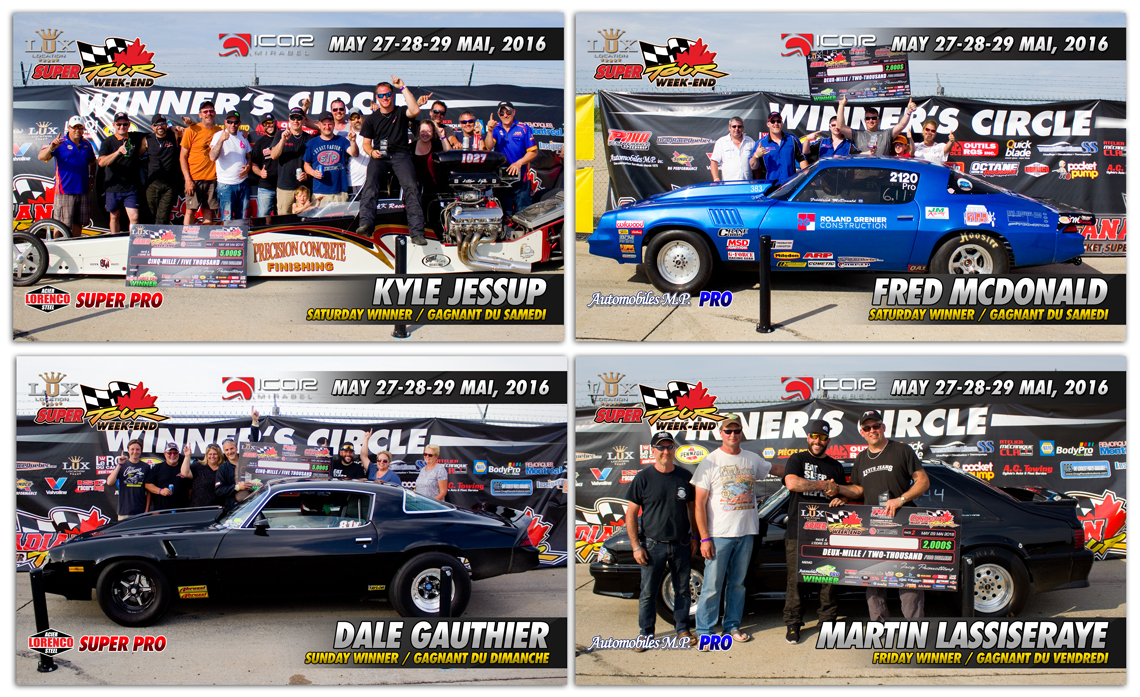 Back on Track at Napierville, the eventual Super Pro champion Kyle Jessup won a second time and Cyrille Laflamme from Terrebonne, PQ was victorious in the Pro class.

During the same weekend, Terry Miron from Vars, Ontario went on to win in Super Pro and eventual Pro champion, Fred McDonald scored his second victory of the season. 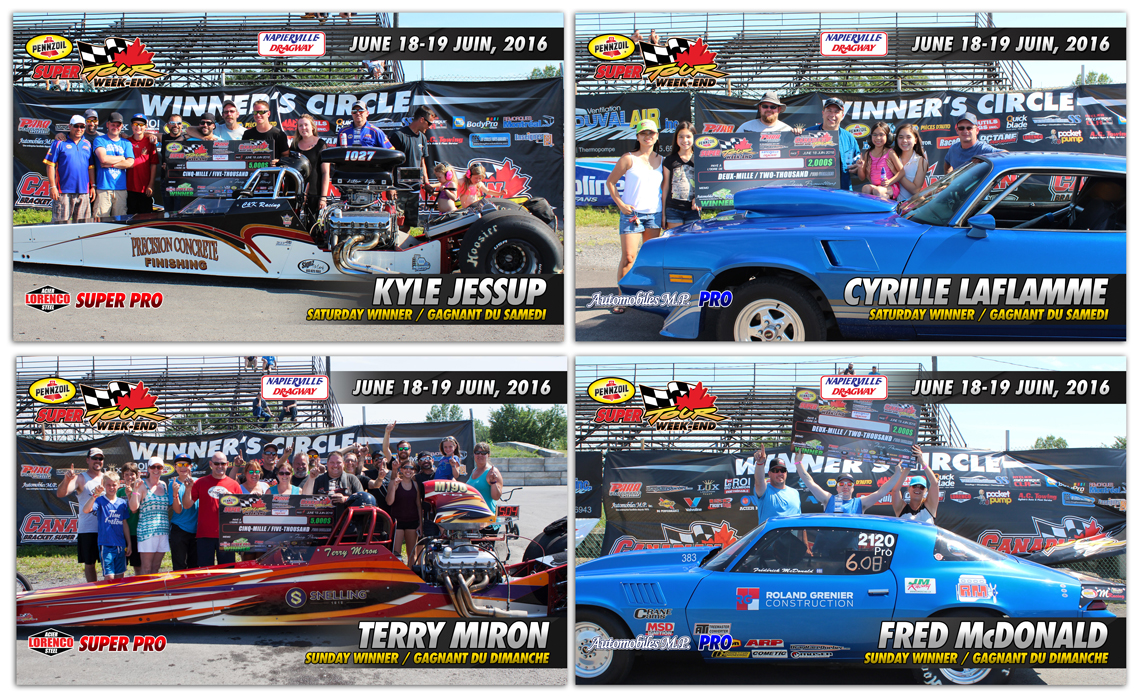 The championship for both categories were finally settled at the last race of the season.

At the season finale in Luskville, Ontario’s Derek Malcolm won an important victory Saturday in Super Pro allowing him to keep his championship hopes. He was then hoping for a first and second round lost from points leader Jessup in order win Sunday’s event to become the champion.

Kyle Jessup confirmed his Canadian Super Pro Title by reaching the semifinals of the last race won this time by Denis Souliere out of Crysler, Ontario.

In the Pro class, he assisted to an extremely close fight between Fred McDonald and Rob Graveline. Both drivers were still in competition in the quarter-final round of Saturday’s race while McDonald was defeated leaving the clean way to Graveline. Rob Graveline out of Ashton Ontario won that fifth round and took by the same shot of the head of championship.

Fred McDonald hadn’t said its last word. With Graveline going out in third round on Sunday morning, the driver from St-Sulpice, PQ had to win three more rounds to become the national champion.

Fred McDonald reached to 4th round to become the 2016 Canadian Pro Champion passing Rob Graveline by only a few points. Jim Hewitt went on and win that race. 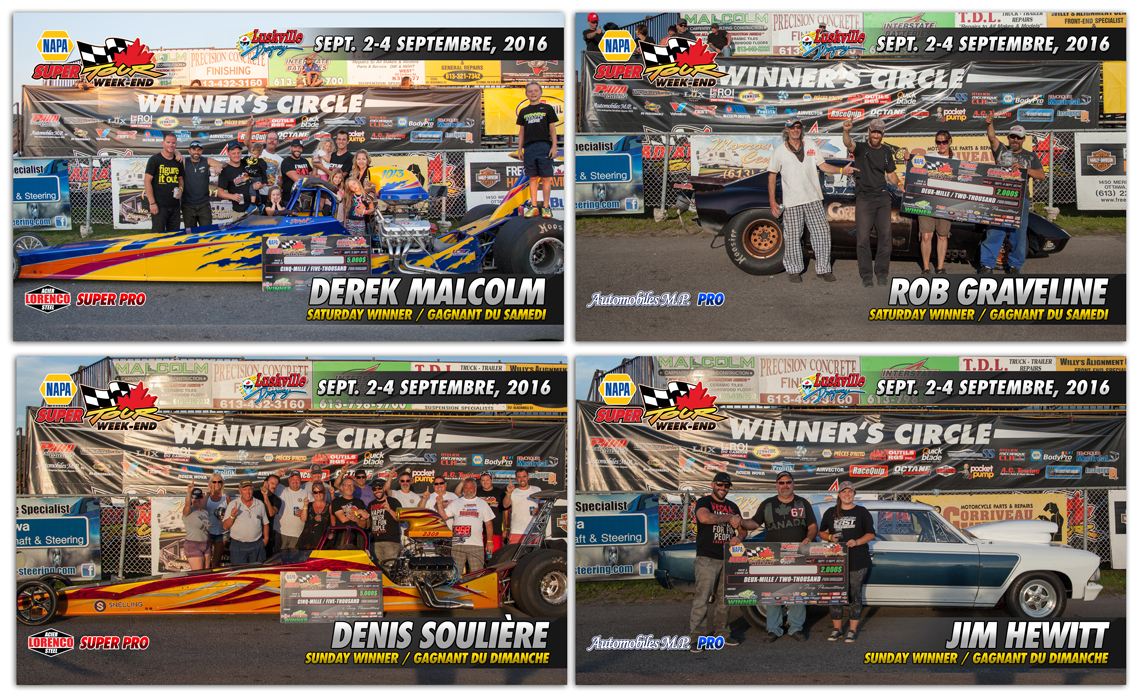 The next generation of Racers is very important at the Super Tour! Junior Dragsters races were held at each Super Tour Weekend and the winners received the same trophies as the Super Pro and Pro winners! The winners of this category this season were: ICAR, Ashley Ogilvie and Landyn Urslak. Napierville, Ashley Ogilvie and Brody Bellefeuille. Luskville, Max Gauthier and Landyn Urslak.

Canada’s top 10 drivers will be crownd at the Canadian Bracket Finals Racers Party at ICAR Mirabel on September 24.

Here are the 10 best drivers of the season.

He got his best performance at the 4th race in Napierville with a runner-up finish. The Laval racer finished the season with a total of 4,200 points. Give it up for our #10 finisher: Fred Angers!

A Runner-up finish at the 4th round in Napierville and good performance at the last weekend allow the Quebec City Racer to finish the season with a total of 3,800 points. The number 10 position in Pro is: Daniel Blouin!

He won the second round at ICAR early in the season. He is the only driver in the top 10 with a door car. The driver out of Belleville, Ontario finished the season with a total of 4,400 points. Super Pro Number 9 is: Dale Gauthier!

A very regular racer this season with several good performances. The racer from St-Lin, PQ finished the season with a total of 3,800 points. Pro Number 9 position is: Bob Savard!

He was very consistent throughout the season, including a semifinals finish at ICAR . The racer from Ottawa ends the season with a total of 4,430 points. Super Pro Number 8 is: Troy Davis!

An excellent season for the Valcartier, PQ racer with a total of 3,900 points. The number 8 finisher in Pro is: Eric Monaghan!

The Rookie driver surprised more than one  this season. After a runner-up finish at the 3rd round in Napierville, he then went on to win the prestigious Bracket Bonanza and finished the season with a third victory in September at Luskville. The Alexandria, Ontario racer finish the season with a total of 4,600 points. Give it up for the number 7 position in Super Pro: Eddie Lapointe!

The Orleans, Ontario racer finished the season with a total of 4,100 points. Pro Number 7 is : Darryl Jensen!

The Laval, PQ racer finishes the season with a total of 4,100 points. The number 6 position in Pro is: Yves Poirier!

He won the 4th points race at Napierville and has been very consistent this season with good results at each race. The driver out of Vars, Ontario finishe the season with a total of 5,000 points. Super Pro Number 5 position is: Terry Miron!

He won the second points race at ICAR. Beauport, PQ driver finished the season with a total of 4,130 points. Pro Number 5 is: Martin Lassiseraye !

He is the racer who ccumulated the most points without winning a points race. The Laval, PQ racer finishes the season with a total of 5,200 points. Give it up for the number 4 position in Super Pro: Frank Angers!

He is the winner of the 3rd points race at Napierville. Terrebonne, PQ racer finished the season with a total of 4,230 points. The number 4 position in Pro is: Cyril Laflamme!

Runner-up at the first points race, the St-Colomban, PQ race finishe the season with a total of 4,930 points. The number 3 position in Pro is: Eric Corriveau!

A semifinals finish at the 4th points race and a win at the 5th one put the driver at the top of the points standings until the last race of the season. Very good season for the Ashton, Ontario Race who finish the season with a total of 5,500 points. Give it up for the number 2 position in Pro: Rob Graveline!

He not only occupies the second rank, but he is also our 2016 Super Pro Canadian Champion. With two Super Tour wins and more than 10 total this season he is unquestionably the best Bracket Racer in Canada right now. He ccumulates a total of 6,430 points. A BIG round of applause for the 2016 Super Pro National Champ: Kyle Jessup!

Two Super Tour race wins this season and a quarterfinals finish at the last race allows St-Sulpice, PQ drivers to ccumulate 5,600 points good to win the points championship in extremis. A BIG round of applause for the 2016 National Pro Champion: Fred McDonald! 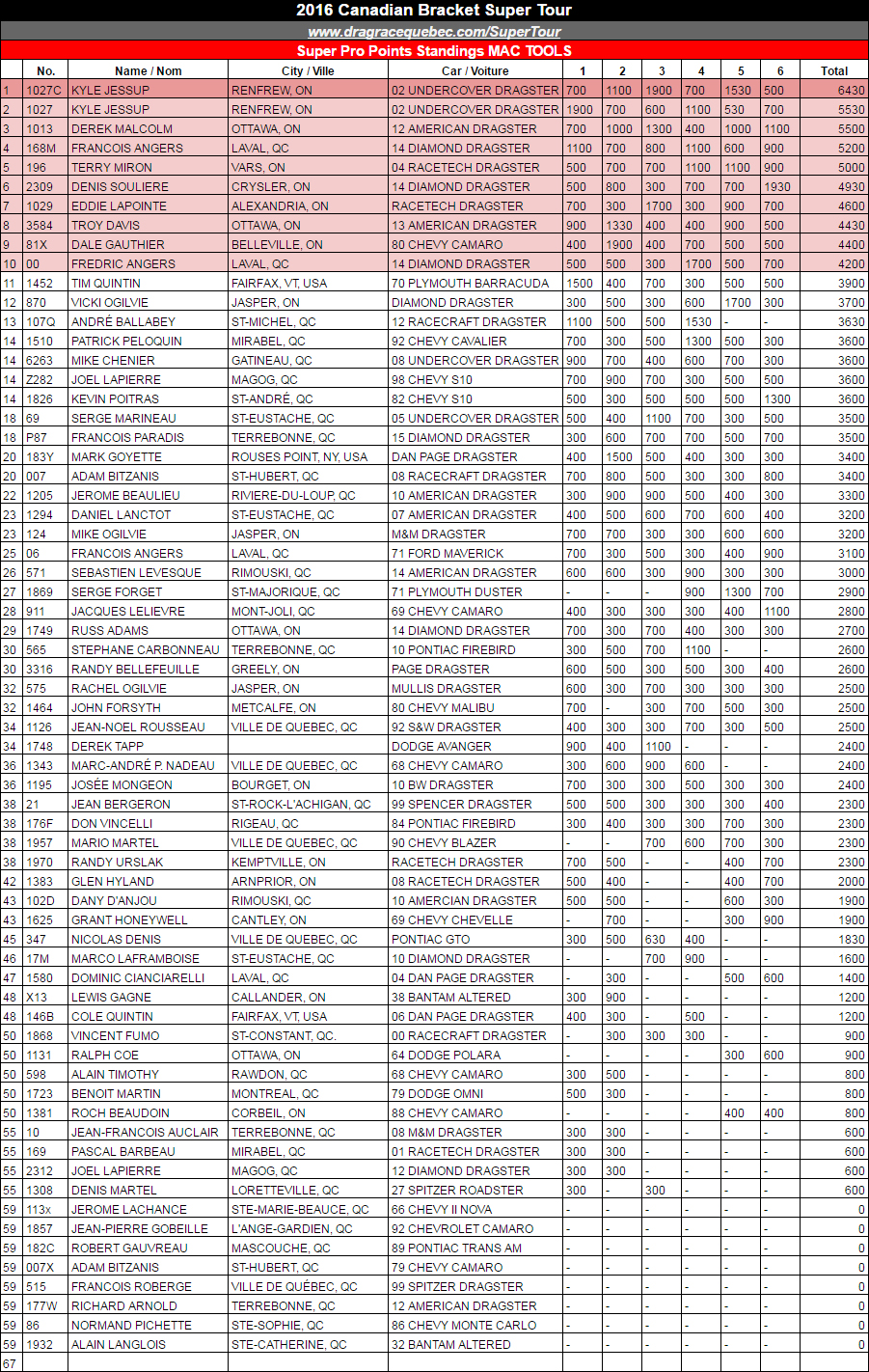 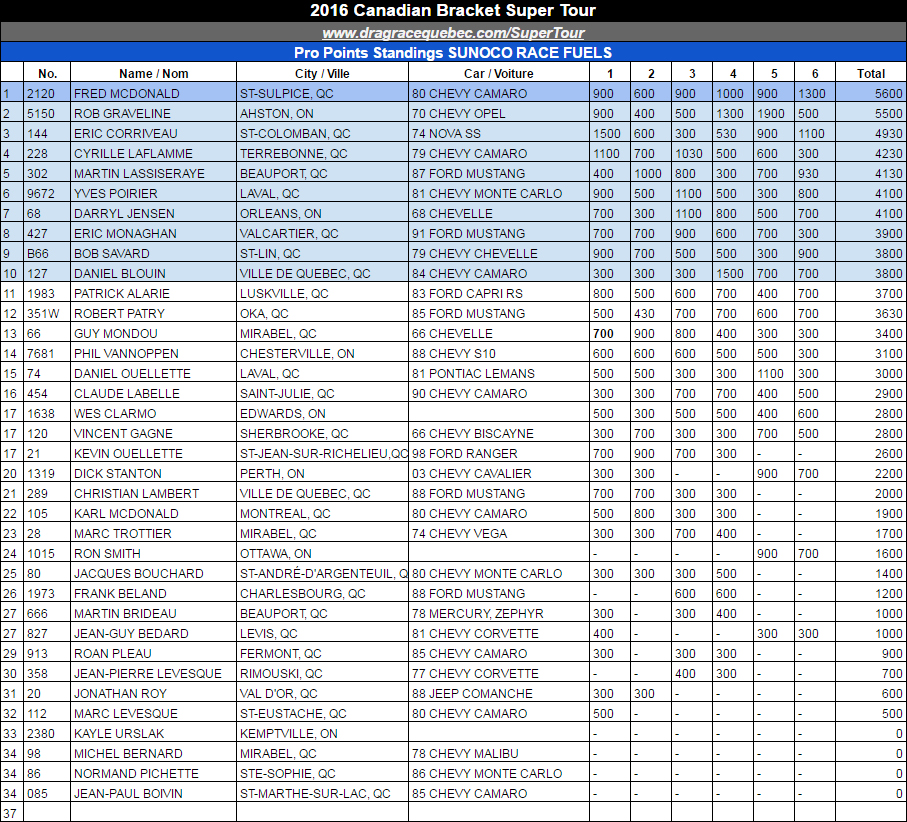 In addition to their National Championship Trophies, Kyle Jessup and Fred McDonald will each receive the $5,000 and $1,000 for their title.

Kyle Jessup also will get a $1,000 bonus for finishing first and second in Super Pro this season. Rob Graveline wins the $500 for the second position in Pro.

Derek Malcolm and Eric Corriveau finish in third place in their category. They will receive a $800 and  400 for their performance.

Frank Angers and Cyril Laflamme finish in fourth place in their category. They will receive $700 and $350 for their performance.

Terry Miron and Martin Lassiseraye finish in fifth place in their category. They will receive a $600 and $300 for their performance.

Denis Soulière and Yves Poirier finished in sixth place in their category. They will receive $500 and $250 for their performance.

Eddie Lapointe and Darryl Jensen finished in seventh place in their category. They will receive $400 and $200 for their performance.

Troy Davis and Eric Monaghan finished in eighth place in their category. They will receive a $300 and $150 for their performance.

Dale Gauthier and Bob Savard finished in ninth place in their category. They will receive $200 and $100 for their performance.

Fred Angers and Daniel Blouin finished in tenth place in their category. They will receive $100 and $50 for their performance.

A ton of appreciation giveaways were given this season, here is the summary. 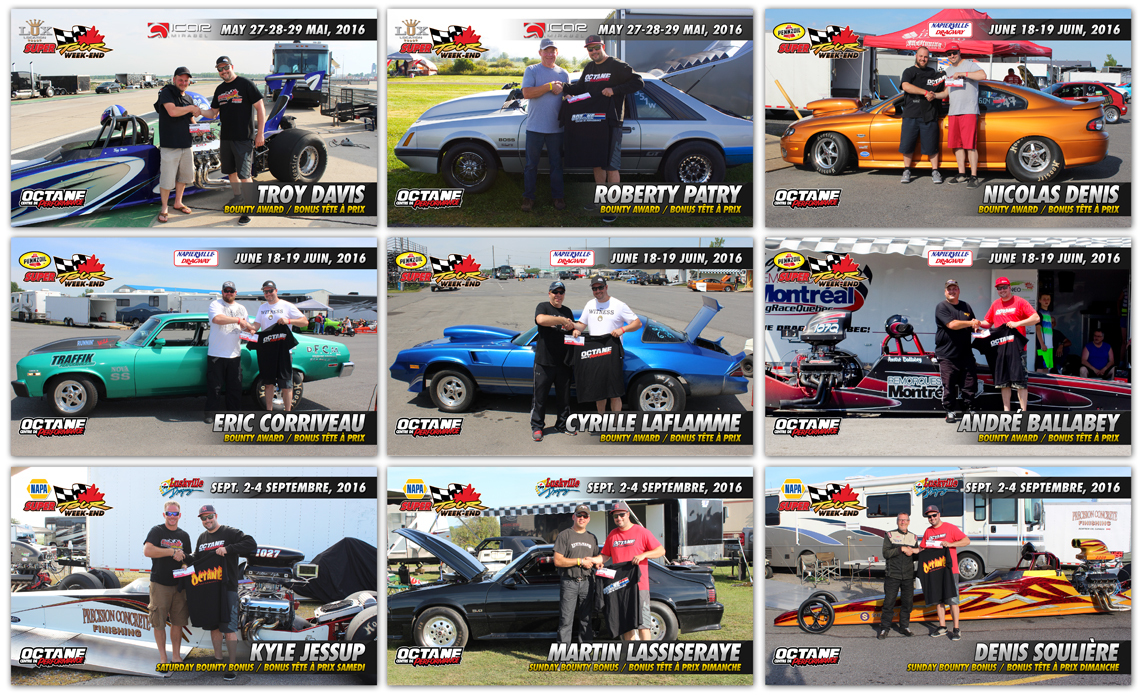 The Hard Luck Raffle was presented by Pocket Pump for racers without any round win at a weekend. The winners got a free entry for the following race. ICAR, Joel Lapierre and Jonathan Roy. Napierville, Vincent Fumo and Daniel Ouellette. Luskville, Sebastien Levesque and Guy Mondou.

Obviously, Saturday night races always ended with the famous Racers Party presented by Remorques Montreal. Nothing better than good food, music, a ‘’little” bit of mixed drink and a few drag racing discussions to end the day in style! Thank you to our Cooks this season: André Ballabey Luc Trépanier, Fred Angers and Lucie Campeau. 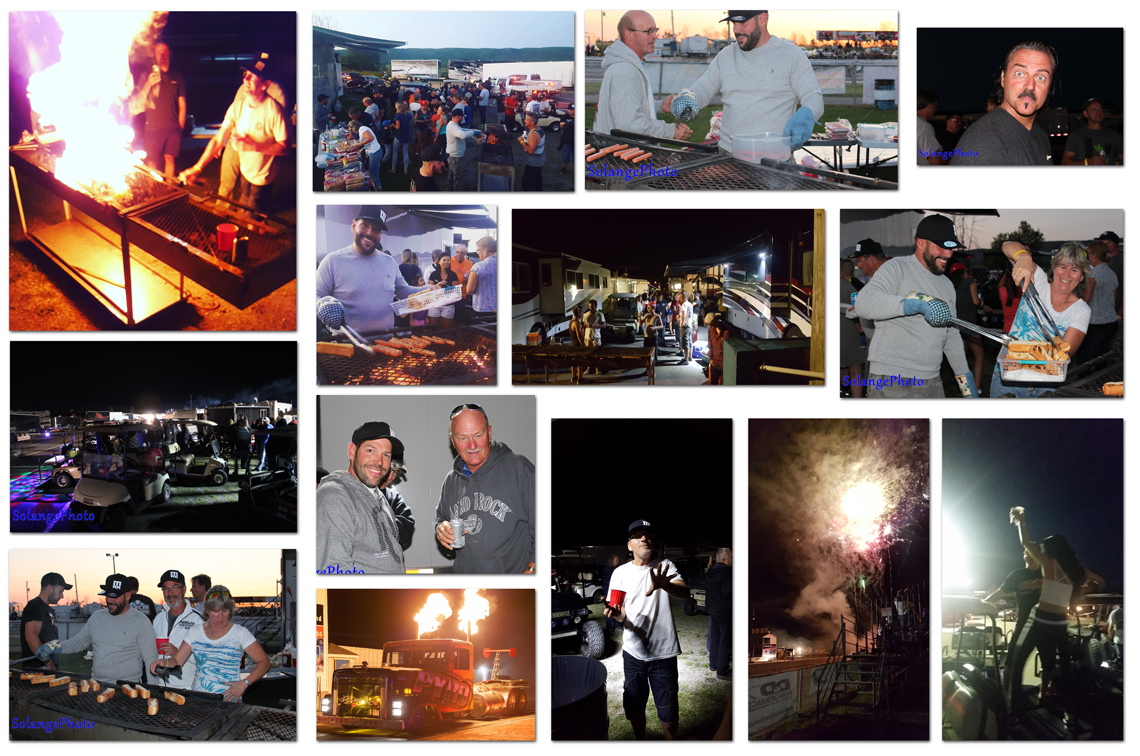 Finally, a big thank you to our track photographers who spend entire days to capture our cars and beautiful moments. Solange Lefebvre, John Chambers, Daniel Hamel and Dan Langevin!

Here are the Super Tour video footages produced ​​by DragRaceQuebec.com this season. See you next year!